Curtis Little: goodbye to one of the greats


On Friday, I went to another funeral. 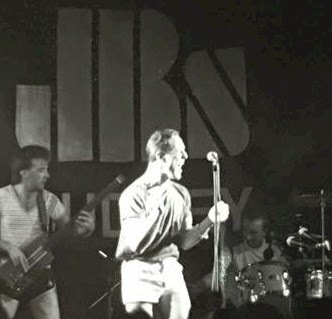 It was to send the great Curtis Little on his way, and to celebrate his life.

When I landed in Birmingham, two generations ago, I was taken, very early, by Slender Loris, a band that mixed complex intelligent songs with delivery, from Curtis, that was punchy as hell.

As a DJ, I couldn't believe my luck: a voice like that? On my patch?

Whip-thin, all sinew and muscle, not a spare ounce on his frame, Curtis was the epitome of a front man. He had a voice to die for, rich, soulful, deep, and he really knew how to use it. Where it came from, God only knows. But he was a joy to watch.


Curtis didn't stay with Loris forever. He had loads of bands. There was a particularly fabulous 80s outfit, The Flying Doctors, with the exceptional Pete Oliver on guitar, and a platoon of hardbitten excellent local musos holding it all together. They were, tight, showy, and a lot of fun. And Curtis ran his own bands for many years: Curtis Little and The Receivers, and then simply the Curtis Little Band, dishing out killer soul and tasteful rock grooves to local crowds and knocking them dead. He always showed immaculate taste.


For a lot of reasons – fashion, health issues, a music industry geared to marketing rather than talent, and the simple and sometimes awful business of handling what life throws at you – Curtis, like many other wonderful performers, never got to play to all the audiences his talents should have taken him to. It didn't happen; it should have.


But there is a marvellous legacy, and it's not just the music he made, or the stunning musicians he surrounded himself with, and the videos you can dig up. That generation of musicians, active from the late 60s and 70s, took things to a level that hadn't been hit before, Just as musicians do today, they explored, experimented, and hit new heights.

Here's the closing part of an extravagantly wonderful live set from the Flying Doctors that my old station, BRMB, recorded 35 years ago. It's breathtaking.


Just from that band alone, to my knowledge, two excellent musicians – Jamie Little and Rob Oliver, sons of Curtis and Pete, have followed in their dad's footsteps. You don't have to look far to find other children from that generation of musicians who are making their way in the industry. I can think of half a dozen great musicians in this town, who learned from their muso mums and dads. I'm sure you can, too - and I'd really love to hear your stories.

So, over and above the music those superb musicians made, and in many cases, happily, still make, and over and above the pleasure they have given to thousands of us - something that really should be acknowledged as a true mark of success - there's more.

Their children, the kids who grew up with them in studios and rehearsal rooms, the ones they they taught, have headed out to make their way too. I that's pretty wonderful.

And the funeral? Curtis pulled a huge crowd, of course. Birmingham Rock Royalty turned out in force. It was touching and life-affirming. And I've never laughed like that at a funeral before.

So, thank you, Curtis, for the good times and the great, great music. And thank you too, to all the musicians you worked with and inspired.

Standing in a gig in Newcastle listening to a thoroughly competent vocalist the memory of Curtis at shows in the Selly Park Tavern in the 80s suddenly shot me with happy memories so I googled. So sad to hear he's gone - still the best I ever heard. Especially his version of Clarence Clemmons' Savin Up. Thanks Curtis, 30 years later in another town.