Our local music ecosystem is brutal. That can actually be a good thing.


Studies in PR: deals and favours over there; music supported right here.


This past month, several pretty great music releases came out, all from local acts. Hannah Brown premiered her new single two days ago at Birmingham's Ort cafe. Chris Cleverley plays there there next week to launch his new album. Boat To Row are now dishing vinyl copies of their first album, with a celebratory hometown gig show soon, and Victories at Sea, fresh from an All Year's Leaving dj set, have come up with a gorgeously packaged first album, also marked with a gig. Last week's post covered Kim Lowings and the Greenwood's new album.

All are local to the West Midlands; all are self-releasing, fiercely proud of their work, and all are engagingly modest. For all them, it's about the work and the creativity. They've all run through brick walls to get to this point.

I'm sure that an awful lot of established artists feel the same.  But there's a critical difference. Once a national promotion machine kicks in, they're just... product.


It turned out to be a busy day. I needed a rare vinyl 7" for a show I'm producing. There's only a few hundred copies. But, lo! a dusty copy is unearthed from a King's Heath attic.

Just as well I was in the neighborhood. Long before questions of exotic vinyl, I'd set up a chat not remotely to do with vinyl nostalgia.This was to be all about right now, with a storming folk talent: Kim Lowings.

Kim Lowings heads up Kim Lowing and the Greenwood: a powerful, articulate, highly intelligent folk-oriented local outfit. The new album swings between Kim's own songs, which are resolutely modern, and traditional material. And Kim just happens to have a fantastic voice. Comfortably settled in over coffee, it looks like things are starting to kick off for her and the band. But we did, actually, touch on vinyl. In the end..

Vlad the Programmer: radio from the other side of the Iron Curtain, then and now

Ever caught up with people you used to work with? Laughed about the old days? Bet you didn't have days like these. 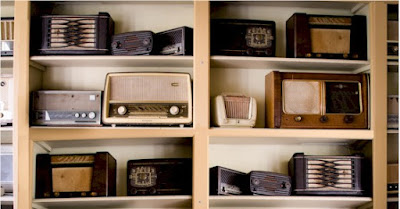 Twenty two years ago, I was in Sofia, Bulgaria training a young radio guy in Selector, then the leading - pretty much the only - music scheduling software for radio. Pertinently, we also spent a lot of time on Western radio programming styles.

Vladimir Daynov is a big wheel in Bulgarian radio these days. Back then, he was the head of music at the fledgling FM Plus; I'd been sent out there by the then GWR group. Typically for the time, GWR had moved into Europe as the UK market matured.

Eastern European radio was not exactly regulated; after the Iron Curtain fell, expectations were wildly optimistic. Now, it's a lot closer to the Western model. That may or not be a good thing, depending on your point of view. We'll come back to that, Vladimir and me. We've been swapping notes for weeks...
Read more »
Posted by Radio To Go at 08:41 No comments:

You're in the studio at last after all these years. What now?

You know the songs, backwards. What happens when you go in the studio to record? Here's two different worlds with quite a lot in common.

I've been talking recording a lot recently. Last month, Chris Cleverley, an astonishingly talented and inventive singer-songwriter, wrapped up his first album; we talked about the process. If you've haven't seen seen Chris yet, by the way, go. Soon.

Last week, I took tea with Ruby Turner, who is fresh from laying down vocals fronting Jools Holland's R and B orchestra. She's done over 15 albums of her own; she's a featured vocalist with Holland; she's guested everywhere. Ruby hasn't so much bought the t-shirt as designed the damn thing. So I asked her about the recording process too.

Two very different perspectives: tyro and veteran. I wondered if they had anything in common. Turns out they do.

They thought it was all over. It isn't, now. A Birmingham Reggae institution steps it up 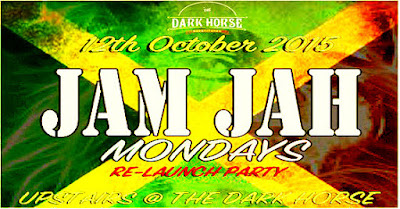 Robin Giorno is persistent. He's been cooking up reggae grooves in Brum for nearly twenty years, with his studio and the Friendly Fire collective. For well over a decade, Monday nights have played host to a freebie event mostly at the Bull's Head in Moseley, Birmingham: Jam Jah Mondays.

The Bulls Head has new owners now. Its days of frenzied music craziness are over. The place has great history – Sam Redmore and the Leftfoot crew ran nights there; Ben Calvert's Bohemian Jukebox, Brum Notes' live nights and many more have all left their mark. It was a small room, with iffy sightlines but great breakout areas.

So where have they all gone? Well, Sam's breaking through nationally, and not before time. And Ben's taken his Jukebox to the Hare and Hounds every other month. Now, JamJah Sound, after a short but worrying pause, are stepping it up fifty yards down the road, with a different landlord – now it's Keith, at the Dark Horse.
Read more »
Posted by Radio To Go at 08:26 No comments: