It was fifty years ago today! The merchandise is here to stay!

Tell me about the good old days, son...

One of Birmingham's finer music DJs, Dylan Gibbons, son of Steve, has dug out a lovely flyer and put it up on Facebook. It lists acts playing the long-gone Barbarellas in Spring 1974, 43 years ago. I was at the (also long-gone) BRMB Radio then. I interviewed some of those acts on air before they headed to the gig. My show ran from 7-10 at night; the timing worked. The complete flyer, with amazing spelling errors, is available to enjoy a bit down this post: you can see Queen, at the start of their run, and Cockney Rebel too.


But check the March acts, in the detail above. From March 28 to 30, Bill Haley and the Comets played. Then, Hayley was at the tail end of his career, aged 49 or so; he died at 55. At his peak, he played the Birmingham Odeon, in 1957. Haley it was who had the very first rock and roll hits, in 1953 and 54. Then Elvis came along and blew him out of the water.

Nostalgia kept Haley in business. And look! The very next day, a few years into his career, there's Steve Gibbons. Steve, of course, is still gigging now. How brilliant is that? The entire historic timespan of rock music, from 1953 to now, captured quite by accident on a playbill from two generations back.

It's lovely to look back at those days. Nostalgia's great fun. I do, however, get ticked off at the nostalgia industry. The Victoria and Albert museum in London makes a bundle putting on artsy nostalgia shows, generally about acts they wouldn't have given the time of day to when those artists were at their peak. In 2013, the show was David Bowie, and the merch page is still up on site, with goodies at eye-watering prices - £125 get you an album cover print; Bowie vinyls are £25 a pop.

This year, it's Pink Floyd. Step right up, £20 gets you in the door, so you can be told all about it. Exit through the gift shop – where pink Pink Floyd headphones go for a mere £379, and a Dark Side Of The Moon cycling jersey is a snip at £85. Bargain! Have a cigar! That's some considerable distance from one of the albums of my student days, Ummagumma, half of which was recorded in front of maybe 200 souls at Mothers in Erdington.

Brace yourselves, though: Sergeant Pepper is now fifty years old. So there's shows on TV with learned and earnest experts. Just out: a 6-CD reissue package. While the Beatles had, by 1967, long since moved out to country estates in the south, Liverpool, logically, is putting on a summer series of events. Most of them are free, which is fair enough.

Thing is, I remember the day the album came out. We lapped it up, of course – the Beatles were ours – but it was part of our lives, not some pumped up deal, it wasn't a marketable experience. We were kids, it was our music, end of. The Beatles weren't gods; they were just good guys, our good guys. The marketing-driven reverence now being afforded the band, and which shoots though the poshed up Bowie and Floyd museum offers like a lucrative golden vein, simply wasn't there.

That deification of things past is there for commercial purposes. It's only another way to squeeze yet more money out of the original product, after cassettes, CD reissues, repackaging, remastering and more. With this reverence come the priests of pop culture: the writers, the experts, the pundits, the curators, generally quite a lot younger than the audience this music was first made for. Of course, that's nothing new – as long as I can remember, we've had fresh-faced jazz pundits explaining Miles Davis or Thelonious Monk, Wagner experts, Sinatraphiles, ready to explain it all.

Who knew? Well, we did, actually. 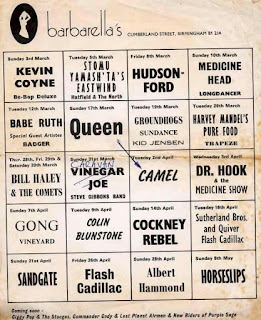 Only now, I'm taking it personally. I'm being lectured about the music of my youth, the stuff I grew up with, by people who weren't born when it came out. And I'm sorry, that does piss me off. The music? It was and is brilliant, and it lives on.

But its longevity and charm provides platforms for more revenue generation and pundit career development. The people who paid for that music in the first place are no longer part of the equation.

I'm not saying pundits 25 years younger than me can't have valid or interesting takes on the music, mind - of course they can. There's always room for a fresh perspective. But that room only exists because of the nostalgia industry.

Meantime, looking at that frayed old 1974 flyer for those bands at Barbs, I'm thinking of the bands of the day, and exactly how great that classic Gibbons line-up was (the current one's pretty damn good, too). But there's no money to be made, or careers to build, out of that scene. The V and A won't come calling; fresh faced music scribes won't prance down Broad Street expounding to camera on how great it was.

But I bet they're working on those Police and Dire Straits shows right now, for some time next decade. Peter Gabriel and Genesis? That's an obvious one. What price a Coldplay retrospective for 2030?

Celebrating one of the greats... 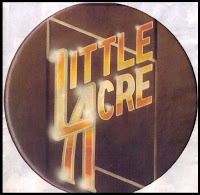 I blogged about Jim Hickman in 2014. Jim was one of those singers: big, loving, soulful. That post (read it here) is a potted history of the best of Black Country music from back in the day.

Jim wasn't doing well when we talked: drawers full of scary medication. But he rallied and went back out on the road. Things were good, his voice was right there, and all his years of craft and experience showed in his performances.

Shockingly, he passed away, days after a 2017 New Year's Day gig. His funeral was rammed, a testament to how loved he was.

Now, there's something grand and happy, this coming Sunday: the Jim Jam, set for Sunday 11th June, to celebrate Jim's life. I doubt we'll ever see such a gathering of old and new-school West Midlands talent in one place ever again. 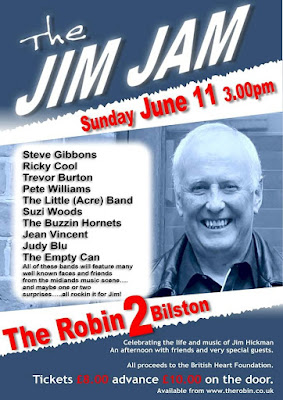 The Jim Jam takes place next Sunday at the Robin 2 in Bilston, from 3pm.

Just take a look at the poster. That's some line up. More acts are coming; there will be surprise guests. If you ever enjoyed Little Acre, or ZooQ, the Honeydrippers with Robert Plant and Ricky Cool, or more recently the Little Band, you should go.

This gig is to set up to do three things: firstly to remember and celebrate Jim; secondly, to raise money for research into heart disease, which was what took him away; and thirdly to have a bloody good time listening to great musos, all friends and contemporaries of Jim's.

This is proper West Midland old-school rock royalty. I can't wait. I am hoping – no promises – to capture some of the performances for Brum Radio. But when it's live, there are no guarantees. If it works out, it would a lovely little extra to mark and honour Jim.

We marked his passing on Brum Radio last January this way:


And I hope to take it a little bit further on Sunday. We'll see. Can't wait...

Tickets for the Jim Jam are £8 in advance from The Robin 2 website, here