It's election season. God help us. 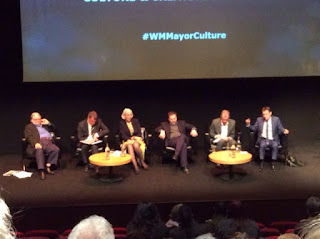 I went to a hustings this week. A what? A hustings – that's where a bunch of people who want to be elected try to convince you that they know what they are talking about, and have an idea of a way to go forward.

Elections. Again, dammit. The reality is a parade of insincere individuals spouting robotic slogans to convince us that they really care, when for the past ten years (and more, going back to 1997 and Tony Blair) it's been painfully obvious that they really don't.

This hustings was for the West Midlands Mayoral election, and the specific area for discussion was Culture. You probably didn't know that this was going on. And if you did, you probably weren't that excited – after all, the hall (the small one in the Birmingham Rep/Birmingham Library complex) wasn't even full.

I wanted hope. I lost the will to live.

God, it was depressing. Six candidates, wielding sound-bites ranging from old-school hard left gags (the Communist guy, who might be good fun at a party) through to the deeply depressing 'Take Back Control' slogan that Labour have saddled themselves with – what were they thinking of? But as for even half a spark of originality? Thin pickings, I'm afraid. The Green party guy punched above his weight, and the Lib Dem lady was ever so nice and reasonable, but I don't see either of them sweeping the board. As for UKIP? Talking with any credibility about arts and culture in the most diverse region in the UK is, frankly, a bit of a challenge.

Meantime, at the coal face - anyone been there to take a look?

Local knowledge, let alone recognition of the problems people in the creative sector have to deal with was pretty much non-existent. Sion Simon, the grumpily subdued Labour guy, muttered a few words about local music, which was the least I would have expected from an ex-employee of Music UK. No-one else had the remotest clue about how brilliant our music scene is. Of course, they'd have had to have done a bit of research. That means rather more than just going to a play at the Rep.

There was talk of Channel 4 coming to Brum. There was talk of Stephen 'Peaky Blinders' Knight's plans to set up a local studio. Both of those would be nice, of course. But nothing's happened yet. Still, it let the candidates witter on about theoretically positive developments


And there was talk of major gigs, big names coming to Brum! Whoopee! But those events are self-funding, and when you think about it, they actually extract money from our region. Some vague talk about corporate partnerships emerged from the (very well-funded) Tory candidate, Andy Street, who bounced about enthusiastically, but actually said very little indeed about anything, and saved a low politico blow for Sion Simon to the very end.

But as for culture? Oh, come on. Nobody paid the slightest attention to the grass roots areas where new theatre, dance, music, poetry, multimedia and experimentation are flourishing, entirely through the efforts of dedicated individuals who love what they do. Nobody talked about growing and supporting local talent. Nobody talked about securing and preserving venues and platforms for talent to emerge. Nobody has the remotest notion of making positive use of the brilliant work that's already going on, and which will continue to go on, with no support from funding bodies. Nobody even acknowledged that the grass roots is where it all starts from, and that's why the grass roots are so important.

The audience was, predictably, clued up on funding. Questions ranged from the well-documented and obscene gap in ACE funding, where London's spending ran at £26 a head, and ours ran at £12.33 a head in 2015/16 - before the more savage recent cuts - to the insultingly paltry BBC Midlands regional spend, which has led over the past two decades to a virtually complete collapse in local radio and tv production. When these figures came up in questions, every candidate sprang to life and banged on about how jolly unfair it all was. But as for a strategy to build up from where we are now? I heard nothing.

I will vote on May 4th. I will vote with my heart. But I don't expect things to change in the slightest.
Posted by Radio To Go at 14:04 No comments: