Lately, I've been thinking about protest songs. The ones we used to hear all the time back in the day. The ones I got to play on the radio.

You don't hear protest songs on the radio now. So it was nice to hear the excellent Amit Dattani give an outing to Dylan's protest anthem 'The Hour When The Ship Comes In', at a gig this week. People were singing along, too, to a song recorded in 1964.

Earlier that week, on Facebook, a pal commented warily on fresh video cameras in his neighbourhood. So I put up a YouTube link to Buffalo Springfield's 'For What It's Worth', to be ironic, like you do. The verse I had in mind was this


Paranoia strikes deep
into your life it will creep
It starts when you're always afraid
Step out of line, the man come and take you away

Hippy boomers will remember it. But It was only after I stuck the link up that I realised the song, a staple of my teenage years, was fifty years old. That set me thinking.


The music of the day - protest. Then.

In the 60s, Protest Music was big. America, especially, saw waves of politicised unrest: the 1966 Watts riots, decade-long Vietnam war protests, with riots at the 1968 Chicago Democratic convention, and the 1970 shooting of students by the National Guard at Kent State.

Protest fed the music we listened to. Some of the most incendiary and uplifting soul music ever recorded was triggered by the black power movement – think Aretha and 'Respect', BB King's 'Why I sing the Blues', Marvin Gaye's 'Inner City Blues', Stevie Wonder's 'Living For The City'....

Us white kids in the UK had precious few notions about the brutal realities behind these songs. It was damn good, passionate music. We loved it, we bought it. The record companies who sold it weren't complaining. And there was punchier, radical stuff, from the likes of Gil Scott-Heron and the Last Poets, who made damn sure you couldn't miss their point. Or check out the Staple Singers. Listen to the song, dig into the background.


White protest was higher up the UK agenda. Spearheaded by Folk in the 50s and 60s, it eventually fed into Rock. In the US, it was powered by the ongoing threat to a generation: that of having to go fight in Vietnam. So we had CSNY's 'Ohio', The Doors' 'Unknown Soldier', Country Joe and the Fish's 'Fixing to Die Rag', Jefferson Airplane's 'Volunteers', Simon & Garfunkel's 'Silent Night/7 O' Clock News', Creedence Clearwater Revival's 'Fortunate Son'... at least a dozen great songs from Dylan. I could go on.

Meantime, the Beatles and the Stones struck, in my view, distinctly Lib-Dem positions with 'Revolution' and 'Street Fighting Man' respectively – although, later on, 'Gimme Shelter' and Lennon's 'Imagine' evened things out a bit. But Vietnam wasn't a generational threat to UK kids, so many of the truly venomous and articulate songs largely passed us by.

I got lucky, though. My first paid radio gig was at a rock station in the USA, in 1971, in the middle of all this. So I heard a lot of this material when it came out.


The US Draft and a radicalised generation

Let me paint an unsettling picture. Generations of kids of college age waited to learn their birth date-related number in a bi-yearly lottery draft. Draft numbers ran from 1 up to 365. The lower your number, the greater the chances of being sent to be shot to pieces in Vietnam. The higher the number, the lesser the risk. In the worst years, they'd get well into the 200s, working through the available candidates.

At the station, when we got the latest set of draft numbers, people could call the studio up to find out their number. I remember telling one guy his number was 3. He hung up without a word. Another lad had drawn 315. His reaction was understandably gleeful, but also nauseating: this wasn't a lottery anybody won.

My station, staffed by hippies with ponytails, played rock, catering to a threatened generation. Our music reflected their concerns. This was a constant, overwhelming, threat which galvanised a generation. It lasted until the end of the Vietnam war. After that, sadly, a lot of people shed their political concerns without a backward glance.

That was fifty years ago, and oh, how things have changed. As I said, we don't hear that many protest songs these days, certainly not on mainstream media. Sure, people are still writing songs (and, now, spitting rhymes) of protest. They just don't seem to fit the marketing plans of our contemporary pop megastars.


The primary agent of change has been the web, of course. It has empowered us, yes; but it has divided and distracted us much more. Now, we get predigested protest, simplified and manipulated into slogans and memes, fine-tuned to boost our existing assumptions and fed to us in our online silos. Often there is scant regard for the truth.

We read of dark forces operating in sinister alliances, who don't have our interests at heart. Political-digital skullduggery is rife. We can't control it. That sense of doom and mistrust of forces we couldn't fight back then, echoes down to me when I look at my world today. Then, it was, simply, 'The Man'. Now? Take your pick – we have a cornucopia of paranoia to select from. And it's all logged online.

That's what brought me up short when I stuck Buffalo Springfield up on Facebook. A simple, slightly awkward but brilliant and direct song, that still works. But now we conveniently register our protest online. And, like protest songs were back in the day, our protest has become a marketable commodity. Have your say! Share a political Facebook posting, put up a YouTube link.... and look, everyone has protest emojis.


Lesson learned? I'm too close to now to be able to tell. Maybe things haven't really changed. It's not that different from 50 years back, except that now the waters of bland and diverting entertainment have, again, closed over the rocky outcrops of dissent. Then, protest music, was, typically, co-opted and repackaged by the entertainment industry. Nowadays protest is delivered online with smooth, machine-tooled, well-researched efficiency on our social networks. We sign the petitions, we rage online in chatrooms. It's addictive - we still lap it up. Back in the day, they used bread and circuses.

I do stuff on Brum Radio, a volunteer-run internet station. Listen online here; download the Brum Radio app here. My Brum Radio page is here; scroll down for all the shows.

One of the most exciting albums I've heard in years. I don't say that very often these days. 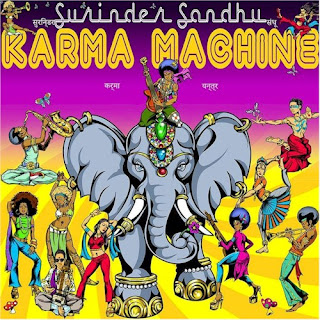 I'm ancient. So I've heard a lot of stuff. I've seen the same ideas come round and round and round. And really, there's nothing wrong with that – pop music is always rewriting itself using what's been done before. For many people, including kids making music for the first time, that's a rush for them, and I wouldn't have it any other way.

Nothing wrong with grabbing old ideas and giving them fresh interpretation either. Once in a while, the results are exceptional.

Step forward Surinder Sandhu. Surinder takes his time. His projects can take years. This one took at least five, but then he is a busy man. When I chatted with him, he was just heading off for a rehearsal at a local theatre, before finishing off a project for the CBSO, and setting up stuff for the next Mr Khan project.

There's a new album at last: Karma Machine. I see it as a hugely significant development in Birmingham's world of music.


What fascinates me is how this is all developing. Asian music coming out of Brum is just - different. We should be very very proud of what's going on.  It calls for a bit of  support and recognition. 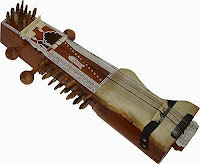 I've know of Surinder for a while. His Saurang Orchestra album, which emerged in 2003/4, was a hugely ambitious and expensive project involving location recording, the Royal Liverpool  Philharmonic Orchestra, and guitar giants like Steve Vai, along with Surinder's super-expressive work on Sarangi.

Sarangi? It's an Asian stringed instrument, with generally four bowed strings and maybe 30 sympathetic drone strings, but proportions vary. Think of an eastern Theorbo, if you like.

The Saurang Orchestra album sported a host of other luminaries too, but I'm not sure it's recouped even now. The economics of modern-day recording are fascinating and terrifying. But the bonus for you is that it remains a fascinating album mixing Asian traditional instrumentation with full-on western ideas. You should check it out.

Of course, east-west fusions have been going on for decades now, from Jazz work (John Mayer, John Coltrane, John MacLaughlin...) and latterly multiple strands of pop and dance emerging now and again into the mainstream. George Harrison deserves recognition for the work he was doing in the mid-sixties with the Beatles, as early as the Revolver album.

Birmingham has rich veins of talent and creativity in this field, with Layla Tutt, Mendi Singh and the Duggal brothers whose cluster of projects takes in Swami and Apache Indian. I know I've missed a few - please correct me if you have the inclination.

Having listened to Surinder's stuff  for a long time, I sought him out for a Radio To Go blog piece a few years ago. At the time, he was planning something new and ambitious, mixing 70s funk with some of his own ideas, under the working title of Funkawallahs. It's finally seen the light of day, and I'm enchanted; I'm astonished and impressed. When I hooked up with him to talk about the project, we talked music and music cultures for hours.


Surinder: For me the album is a look back at my youth growing up in the UK, and listening to James Brown, Earth Wind and Fire, Quincy Jones – later on, Prince... I could go on all day.

RV: On Karma Machine you're using the Sarangi in a different way to how you did fourteen years ago on the Saurang Orchestra project...

Surinder: It's about serving the song. Playing the Sarangi in a soloist manner didn't serve the music on Karma Machine. I wanted to create something to do with texture, to do with the melody. If you look at Motown, or any of the bands that inspired Karma Machine, there's not a lot of solos in the music.

So – a lotta lotta funk. Mixed with all kinds of other stuff. You have to listen to it to believe it. Karma Machine is loaded to the gunwales with some of Birmingham's finest, most able musos - Roger Innis, Glyn Phillips, Loz Rabone, Nige Mellor, to pick a few at random. I think they had a ball recording it.


Surinder: I've worked quite a lot with Loz (Rabone).  Loz  is a brilliant songwriter. And we're making music that's fun, that reconnects us with our childhood. That's what makes it so energising for us. The best way to create is to surround yourself with kind, calm, ego less talents. It was a blissful, creative process.

And it works, by golly does it work. You can check it out on his website and keep your eyes peeled for free downloads in this digital marketing age.

Karma Machine is also the feature album this week on Brum Radio, with a track every two hours outside of live shows.
Posted by Radio To Go at 14:58 No comments: