The oldest Bitch in Birmingham

Rich Bitch studios. What kind of name is that? For starters, a pretty long-standing one

Update: Saturday 6th Dec sees a Rich Bitch Anniversary gig at the Crossing Birmingham.  Rob may even strap on a guitar again. Lots of star guests from the studio's history. Buy tickets here.

When you chart local music history, artists get most attention. Maybe a bit goes to venues, a tiny bit to the fans. But we don’t hear stories about the other guys: the road crew, the PA boys, the promoters who put up gigs, the lighting boys. All of them enterprises that both underpin and depend on the business of local music.

Then there are rehearsal studios. I like rehearsal studios. They mix professionalism and knowledge with a constant stream of new young talent. Sure, there's muso ego and grandstanding, but there's also the chance for of ideas to flow and mix, for contacts to be made. These places smell of hope, potential, aspiration. And work and sweat - in a good way..

Here’s a story about the oldest rehearsal studio complex in the city, which also houses its oldest continuously working recording studio, with a client list that reads like a rock Who's Who: Rob Bruce's Rich Bitch. It's an odd name to work with in 2013, but we'll get to that.
Read more »
Posted by Radio To Go at 08:16 2 comments:

On being a DJ

The Buggles got it wrong. Radio killed the Radio Star; DJs now live somewhere else.

Last week, I DJ’d a gig. Ruby Turner at the Crossing.

I don’t DJ that often. When I do, it’s for serious fun and good reasons: because I like the idea, or the night, or the band, or the organisers, or whatever.

On the way home from my stint, it struck me how the word has travelled, shifting in meaning from its radio origins. The noun DJ has become a verb. It has become a Title, a descriptor. Its meaning has changed, dramatically. Disk Jockeys often don't play disks these days.

Hey, when did it shift? Now we have DJ Culture. Now, you DJ a gig; or maybe you do a DJ set. Or you call yourself something like DJ Krooshal to tell people you’re doing a gig, fly-posting those traffic lights. Me, I’m DJ Urassic, I like that. But I don't fly-post.

All this is a very long way from Make Believe Ballroom or the Geator with the Heater playing the Platters That Matter. The Geator's still going, still on US radio after well over fifty years. But that only takes us back to the sixties. You need to go back a further thirty years to when the term was coined.
Read more »
Posted by Radio To Go at 08:48 3 comments:

Where are the dead megastars with mansions in Moseley when we need them?

Every so often, our elected and appointed leaders stir their stumps, look around blinking, and cry: “Music! Aha! Yes! That makes money! Let’s DO something to exploit our rich heritage!”

They form committees. They write reports. Sometimes they do a bit of research; not much, though, that costs money. They witter on about music tourism. They print glossy brochures and pat themselves on the back; job done.

Then it goes quiet. Something else grabs their attention. Politicians must have the worst cases of ADD. At the coalface, where today's musos toil away, nothing changes. And once in a while the press gets hold of this stuff and pulls out the most headline-grabbing story it can. It happened this week.

Some bone-headed functionary at Oxford Economics, in a Government-backed report, has put forward the notion of music ambassadors for our major cities. And the ambassador for Birmingham would be… Ozzy Osbourne.  The Independent has jumped on this.

Now, Ozzy's a nice chap, but come on. It’s not a great idea; really not. My reasons after the jump.

The Redbeards From Texas started a joke. It very nearly got serious. 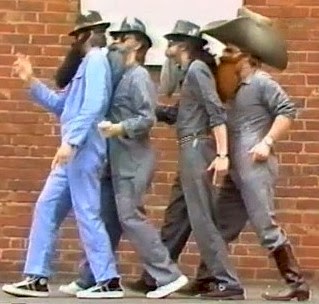 A long time ago, a South Birmingham boozer, the Selly Park Tavern, was hosting a radio gathering: lots of people from West Midlands stations, many no longer in existence.

Onstage: The Redbeards From Texas. A seriously fun band that, later, came this close to breaking though; a whim that almost, almost made it. We’ll get to that. But that night, in front of the assembled might of Midlands radio, they were playing for laughs. They pulled people up onstage to sing with them.

That was fun... until they fingered me. Ooops. I didn’t know the words to Born In The USA, so I bawled the chorus a couple of times, and retreated in confusion. Oh, the humiliation, and all in front of a roomful of my peers. Bastards.

If you google ‘Redbeards From Texas’ now, thirty years after their glory days, you’ll find a surprising amount of material – videos, a discography and reminiscences. This was a band that made a mark. Craig Fenney (aka Bud Weiser), has a ton of stories after the jump.

Police Bastard: still angry after all these years, deep in Punk's underground

"I think there have been times when we’ve been in danger of disappearing up our own asses."

As a young rock DJ, I covered the decline of progressive and hard rock throughout the 70s. Pub-rock rose and fell, global forces like Springsteen and Fleetwood Mac emerged, and Birmingham moved from Monsters of Metal to cross-cultural mixes, (UB40, Apache Indian, the Beat, Ruby Turner). Oh, and let’s not forget New Romantics. On second thought, let’s.

By the end of the decade, Punk emerged, to be rapidly commoditised as product and fashion trend (Generation X anyone?), and used as a career-launching platform (Police, Squeeze and Boomtown Rats). Then the mainstream lost interest, so Punk went underground, morphing from a bunch of snotty teenagers flipping the bird at the man, into something else altogether. Above all, Punk developed staying power.

Police Bastard were punks once. Now they’re punk/metal/thrash, a set of 40 somethings with a remarkably long history, and a new album, Confined.  The dumb rebellious simplicity of the late 70s has been replaced by something more complex, more considered, even dutiful. The music? Savage as ever, of course – but now, these guys can play. Johnny Doom and Mark Sampson talk it up after the jump.