The oldest Bitch in Birmingham

Rich Bitch studios. What kind of name is that? For starters, a pretty long-standing one

Update: Saturday 6th Dec sees a Rich Bitch Anniversary gig at the Crossing Birmingham.  Rob may even strap on a guitar again. Lots of star guests from the studio's history. Buy tickets here.

When you chart local music history, artists get most attention. Maybe a bit goes to venues, a tiny bit to the fans. But we don’t hear stories about the other guys: the road crew, the PA boys, the promoters who put up gigs, the lighting boys. All of them enterprises that both underpin and depend on the business of local music.

Then there are rehearsal studios. I like rehearsal studios. They mix professionalism and knowledge with a constant stream of new young talent. Sure, there's muso ego and grandstanding, but there's also the chance for of ideas to flow and mix, for contacts to be made. These places smell of hope, potential, aspiration. And work and sweat - in a good way..

Here’s a story about the oldest rehearsal studio complex in the city, which also houses its oldest continuously working recording studio, with a client list that reads like a rock Who's Who: Rob Bruce's Rich Bitch. It's an odd name to work with in 2013, but we'll get to that.
Just off the main drag in Selly Oak, down from the University of Birmingham, on a scruffy stretch of fast food joints and down at heel boozers, there’s a vast hangar of a building, a one time part of Birmingham’s metal bashing past. This is Rich Bitch studios, and it’s been going for….


Rob Bruce: "In total? Coming up to 34 years. Thirty two in this building, and about two years in a smaller place just up the road. We were in a cellar under a factory I worked at. We used to make leather belts.

"I was playing in those days... looked at the basement and thought its would make a nice rehearsal room for us. So we did it out, paint on the walls, moved our gear in and started using it. Other bands heard about it and asked us if they could use it too…and that was the happy accident that started it off. I used to leave all our own gear up, and they’d just come in and use it. A ready-made rehearsal room. I managed to squeeze another room in there, and off it went.

What a simple idea. Ready set-up gear; bring your guitars in, plug in, and get to work. Of course, it wasn’t perfect. Studios in basements rarely are.

Rob: "We were right on a railway bridge, next to the canal bridge, and the main water main for Birmingham came though there, carrying water from the Elan valley in Wales – I think it’s something like a one-foot main – and with the bridge next to it with all the heavy traffic, it used to crack regularly…"

And you’d get the in your basement?

"Yeah! We got up to two foot deep at one time. We had Steve Gibbons down there. They used to jam all day. One day, Steve said to me: 'Rob! the carpet’s getting a bit wet!' "

" 'Yeah, we’re flooding again...' I said. So Steve goes 'We’ll carry on a bit, though.' And they made up this song, tap-dancing on the carpet, splashing water everywhere… I thought it was getting a bit dangerous – they were still plugged in!"

"We were packed out 24 hours a day, rehearsals and recording. I used to take the day shift, and another engineer came in and did overnights. We did all the early punk. One band even put out an album that we had demo’d for them onto a cassette recorder."

Things never stay the same. When a massive supermarket development went in at the top of the street, Rob’s premises were bought out. So he took his fledgling business from a scruffy flooded basement to a massive barn of a building, down the road apiece. And set about filling it. 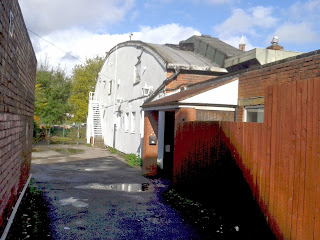 Rob: "I came down the drive here, saw this huge brick building with a curved roof. It was an old engineering company, they used to make lathes. There’s a gantry running all round the building From the front door to the back door loading area for the finished goods. Amazingly the bank was helpful in coming up with a loan to buy the business."

"So we went from 200 square feet to ten thousand… I got the studio set up to get a regular income stream going, and then we set about adding the rehearsal rooms."

So that does make it the oldest place in town?

"Bob Lamb was building his studio off the back of the royalties from the first UB40 album, just about when I was fitting things out here. So I guess it does."

So Rich Bitch – we’ll get to the name later, promise – started off as a recording studio, while partitions went up, sound proofing went in, and cashflow was stretched to the limit. It’s been there ever since. In common with other long-established operations (Robannas, Madhouse Rehearsals, Muthers and other fine facilities are also available), the place is calm, purposeful and tidy, and that's no small feat for a rock business.

Rich Bitch was effectively the first purpose-built rehearsal place in Birmingham, set up with amps and a drum kit in each room. Musicians could and can roll up with just their instruments, plug in and go. The place pulled in a lot of business from a lot of names. In fact it reads like a roll of honour of Birmingham's music history. Rob is particularly proud of a comment from one of the Editors when they returned to rehearse new material: "It feels like coming home".

The place has also always made room for other related businesses, who sublet space – Pacific Sound and Light are there now, and for a long time the legendary guitarist Pete Oliver ran a guitar shop in the premises. Quite a sensible way to spread costs and get some extra income coming in from like-minded businesses.
So we are talking about a market that will sustain multiple rehearsal facilities, even in the teeth of a howling recession?

"There's not a lot of money about, no, but there are a lot of bands again, a lot of players. People want to play again, it’s different from the days of working on keyboards in your bedroom."

And for better of worse, the web has opened things up so bands don’t have to do what a few record company executives tell them to do to get a deal. Which is great,.but it also means, as we've seen recently, less money earned. If no-one's got any money, how do you make your business work?

Rob: "I've been through three recessions in thirty-odd years. Even Maggie Thatcher’s recession only ran for 18 months before we started to feel the change. This is going on for eight years, and I’m not feeling that things are getting better, recovery or no recovery. It’s tough. I’m running with a smaller staff, and I’ve gone back to doing some of the things I did twenty years ago, doing a lot work myself. I love the business."

I love the buzz of seeing new talent flower… have you got stuff like that going in here?

"When you listen to music twelve hours a day, it shuts you down a bit. But every now and then walking down the corridor, you’ll hear something that stops you in your tracks. That’s still there. One was in last night…. Siobhan Coelho. Lots of promise."

I’ve got to ask you about the name. In today’s politically correct climate – and in fact even in the eighties – the name Rich Bitch feels a bit weird. How does the name work for you?

"Going back to the cellar days, the band I was in was called Rich Bitch. So it naturally became Rich Bitch’s place because that’s how we were known."

All blokes, I presume?

"No, no, my late wife Lyn sang lead! Don’t know where the 'Rich' came from, though. But we were a rocky band, and we had to have a hard edge. That’s the other thing – you don’t forget a name like that. So we were stuck with it."

"John Mostyn, who’s now got Bob Lamb’s old place ( now refurbished and renamed Highbury Studio), told me we really should change the name. So I did a bit of research and we came up with the name Milton Grove – that’s the name of the alleyway that leads down to the studios – for our studios. So we tried that, all nice and good to use as a promotional handle. John called me up and said ‘That’s a great name, Rob, you’ll do much better with that.’… but we didn’t!"


More studios and music tech posts on Radio To Go

I can highly recommend Muthers Studios on Rea Street South, Digbeth. The staff are great. There's a venue there now, they've just set up a new bigger recording room and are setting up a drum shop.

Places like Rich Bitch and Mad House and their ilk are the catalysts and starting point for any 'scene' - artists meet, socialise and experiment there. It's odd that recording/rehearsal studios rarely get the credit - it's usually the venues.

I was at RB when we tried the re-branding, it coincided with an upgrade in the studio facilities that made it one of the best in the Country. Sadly the problem seemed to be more about the studio being in Birmingham than anything to do with the name. The trend was for remote locations with accommodation at the time.