"Music isn't free, it takes time, effort and energy, training and all the rest of it. I want to see something for it."

In the September sunshine, backstage at Moseley Folk, Erica Nockalls was all smiles. She'd just played a breezy set as half of Miles Hunt and Erica Nockalls – see this earlier blog post. Sunday was her birthday; the MoFo boys had given her a cake, which she cheerily shared around. 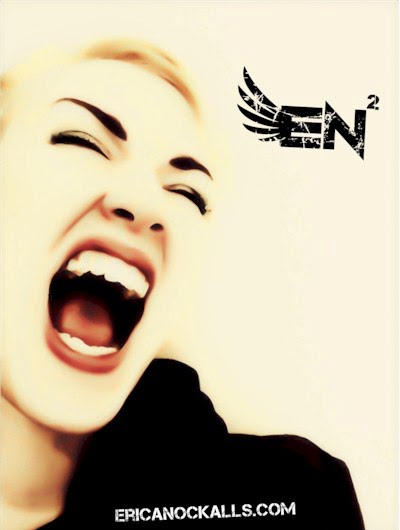 But now we're already, suddenly, deep into Autumn. Things are getting more intense, with a new solo album coming up in October: EN2. Erica is selling the album directly from her site.

It's a world away from her work with Miles Hunt, The Wonder Stuff or the Proclaimers: self-financed, self-produced, self-distributed and self-marketed. And it's punchy as hell.


It's a move on from her first, Imminent Room.

Erica explains: "The music is more progressive, more quirky, still maintaining melody and pop sensibilities. My first record came out on a record label, and I was very happy with how it went. But I'm not a fan of doing things twice. I wanted to self release to have complete control over my rights. It's not going to be on iTunes for now. It shan't be available on Amazon."


"Once you realise that every aspect of the music industry is seemingly totally sewn up, it's liberating to not have to ask for permission, validation or approval from anybody to make my own music. Why should I? Once you stop trying to please or impress people, then that's when the good stuff happens.

"I started writing EN2 on January 1st this year. I wanted to create a record and release it within the year. I get bored of my own ideas quickly. I wanted a more urgent sounding record. I also wanted to make as much of this album by myself, so it's a true representation of what I'm capable of. It's entirely self produced, though I called in a huge favour from guitarist Mark Gemini Thwaite on five tracks. I also sought the opinion and assistance of a record producer/sound engineer friend, Simon Efemey. He works with Napalm Death and produces heavy metal bands. It's completely undiluted, which is what I wanted."

What about distribution and sales?


"I'm pressing up 1000 CD copies of EN2 and for now, these will only be available to pre-order through my site. That's to generate income to pay for mastering, manufacturing and distribution. Once those copies are sold, I may consider the usual bullshit iTunes route. If a label shows any interest after that, then I'll consider my options. I'm doing it my way first. A basic version of crowd funding! It feels like right, and most importantly, it's fair to everyone involved.

You said specifically it shan't be on Amazon.


"You just get ripped off left right and centre. Everyone takes their little percentage and before you know, you've just spent seven or eight months toiling over something for very little in the way of reward. And I'm not being greedy. I'm not being a bread-head about any of this - it's just music isn't free, it takes time, effort and energy, training and all the rest of it. I want to see something for it. If I do break even, the extra money can help fund my live band, which costs an absolute fortune. Everybody's band does.

You present a very precise image. I think that reinforces the online loyalty you've generated: you have an unusually passionate following.


"We do have some very nice fans. Mainly Wonder Stuff fans! I don't think I've particularly got my own audience yet for the Erica Nockalls Band, but this may change.

It's very nice that The Wonder Stuff audience has taken to you.


"It's incredibly nice. I'm overwhelmed that they've taken to me, and I really appreciate their support.

When you're running your own band, do you have to be a bastard?


"Absolutely not. You have to be fair, you have to be kind and you have to give praise where praise is due. And surround yourself with musicians who are smart, intelligent, kind, fun and who like your music.

That's an ideal. How do you achieve that?


"It's not easy. I'm on my second line up already, and the band haven't been playing live for much more than a year. It's hard keeping a relationship going with four other people. It's hard enough with one other person. If we had to spend a lot of time on the road together, it would be more difficult. It's not yet an issue. We're all getting on.

Tell me about the extras: the bundles and packages. Your marketing strategy.


"So. The videos made for Imminent Room: there are nice things used in these that I have no further use for. Take Serpentine City: I have some ex-Soviet gas masks that we used in the video. If anybody wants them, they can buy them along with a record from my website. I'm going to have a nice menu: interesting, quirky prizes that you can buy.


"It's my own version of Pledge but I don't have to pay 15% to someone who's not doing anything. I don't think Pledge are ripping people off. I'm not saying Pledge is a bad thing, it's not for me. And to give percentages away before you've even sold your first copy just seems counter-productive.

Ok. Apart from the gas masks, your hats...

I have an album art exhibition coming up in October. It's a new gallery - Havill and Travis - that's opening in Harborne in Birmingham. The launch night is Friday 17th October - invites only - and it then runs for 10 days.

I'm going to paint a piece for every track on my new record . These oil paintings will come in album order as you walk around the art gallery; there'll be listening booths where you can listen to a piece of music, with a pair of headphones, and view a piece of art that's directly inspired by a track. It's not an easy thing to do.


"And it's invitation only, with a limited amount of guest passes available from my website. So when you pre-order an EN2 copy of the physical record you can also get tickets to the exhibition."

Some of your online stuff is sweetly candid. You put personal stuff up: it's charming... but here, there's a slight aloofness - red carpets and such... is there a conflict there?


"I don't think so. It's important for people to see you as approachable if you want them to buy the music. I don't have any issue there – I'm not that personal. You have to be careful of negativity. If you've got nothing nice to say, don't say anything at all.

"I do try to be engaging, and I enjoy watching people discuss their points of view. I share my personal interests publicly, mainly for my own amusement. I talk a lot about food, booze and art."

Smartphones in the crowd: I really dislike audience videos. You have a technique for that...


"Yes. My band are quite heavy. Simon Efemy does our sound. He knows what I want. If it feels like you're being hoofed in the stomach by a raging horse, and your head feels like it's going to crack open cause it's so loud - then that's what I'm going for. It's quality loudness. I have it so incredibly loud that poor little camera phones can't deal with it."

Ha! Melt those microphones! But there is volume and volume.


"Yes there is, it has to be quality and it has to cover all the different frequencies. My band doesn't sound like me playing the violin with backing. Everybody is as important as everybody else."

The Album
EN2 is available directly from Erica's website, initially in a limited edition CD run.