John Paul White, Victories at Sea, Oxjam, This is Tmrw. When bands promote....

14 bands, lots of local action, starts in the afternoon, runs till late.
Get there early, or you'll miss two days of good stuff and up and comers.


We're closing on this year's All Years Leaving two-day indie-alt festival at the Hare and Hounds. The team behind it, This Is Tmrw, have significantly expanded activities of late. They have a brand. They have an image. They have lovely posters which are regularly nicked before they can do their job - take a look at them and you'll see why. This is Tmrw aren't exactly making money, but the hope is that their operation can wash its face.

John-Paul White has been with the team for five out of their seven years. He plays in Victories at Sea, who are featured in this year's All Years Leaving. Victories At Sea are growing steadily. It looks like they're going to sidle into the next West Midlands video top 50 come February. Decent video numbers apart – and getting these is a considerable achievement – the songs Victories At Sea deliver are pleasingly reminiscent of classic New Romantic post punk pop – without the dreadful mannered vocals. Reminiscent, but not too close. And that puts the band in a good place, in their own field.

JP is very clear about This is Tmrw's founder, Matt Beck. He stepped in because a lot of bands were bypassing Birmingham in favour of, say, Wolverhampton, where Wolves Civic was doing splendid business. Through Matt, Foals came to Brum to do their first local gig at the tiny Sunflower Lounge.


“A couple of years later, we were booked – my band at the time – were booked, to support The Rascals (at the time serious indie contenders). I was impressed. How did they get a band like that to play the Sunflower Lounge? And the next night they were off to support Arctic Monkeys at Alexandra Place or somewhere like that. How does that work?”

One thing led to another, and JP started going to more and more gigs, including indie-alt DJ gigs with Matt.


“Preceding that, the only promoters I knew of in Birmingham had been Rob and Jack at Zoot, who were becoming more and more successful with Editors, and didn't have time to promote, and Arthur Tapp at the Jug of Ale. As a musician, I was wondering who's going to take the city forward?

"In 2009, I was running Oxjam with Nicola Toms, and booking all the bands.As Matt had been running This is Tmrw for two years, I asked him to help out. Matt did that, and he brought a pal, Tom Hopkins, along. So I came on board after that. And last year John Fell of Goodnight Lenin came on board as well. And that's where the festival idea came from. 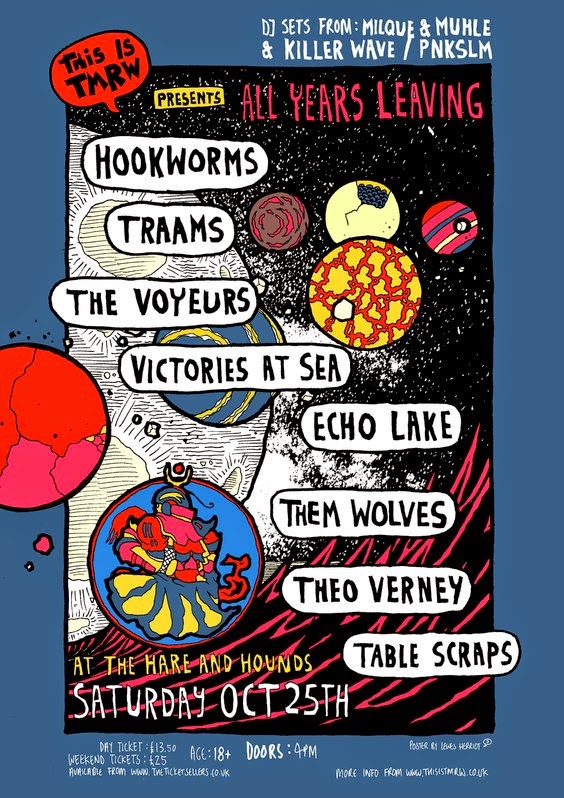 
"Lewes Herriott – he also plays, in Johnny Foreigner... Matt's known him for years. He never used to be in a band.

Ah but there's a long and honourable tradition of graphic artists who also play in bands – people like Hunt Emerson. Do those posters get nicked a lot?


"Yeah – it's expensive. We've encouraged Lewes to exhibit his work. People really like to collect them.

Pity they do that before the gig. You could have a sideline – downloadable images, print to order reproductions... There is an established market for classic posters, especially if you've got prestige names who then go on to be monsters. Look at those classic posters for the Fillmore West from the 60s, with Janis Joplin, Jefferson Airplane, Quicksilver Messenger Service, Steve Miller, Grateful Dead, Santana – they were all local bands on the Bay area at the time. And those posters still sell.


Let's talk about Victories at Sea. Your videos are really nice – but the band aren't in them. You're not featured. Why?


"Budget! Those are all made using Creative Commons footage. We do appear on one, but it's very stylised. We thought that was better than shooting something ropey on a smartphone. Not that there aren't some very decent videos made that way.

I gather that the goal is not to make money. The goal is to break even.


"If we do well at a show, it goes into the pot. So we can put together a bigger offer to get a bigger band.


"I still generally regard myself as more of a musician than a promoter. So that's a question I would leave more to Matt. Ultimately, if I wasn't a musician, I'd like to do this full-time. And we do know people in other cities who do do this full time. It's still difficult to break even. We do a lot of good, but it's still difficult. We have some very fiercely regular people who come to our gigs.

"They come to the whole gig. A lot of people don't realise that as promoters, we like to work with theme, so every band has its place; they're there to be seen. It's like a club thing.

You miss an awful lot if you come in late. Like those acts that might have opened last year... and then bingo! Look what they've done now.


"But people still say, oh, they played a festival this time last year, and they can't have been any good if they were so far down the bill. They don't understand how it works!"