Electric Swing Circus: a band with a plan 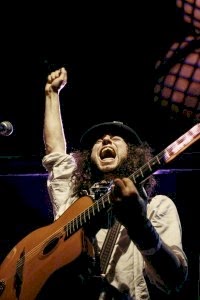 Electric Swing Circus' Tom Hyland is the embodiment of positive and optimistic. He's easy to chat to, and remarkably open about his band's business. I threw a volley of tough questions at him this week; he fielded them all graciously and with good humour.

I first talked to Tom to chart the band's progress since its formation in 2011. This week? A catch-up, ahead of the Swingamajig festival.

The band clearly has a plan and a route map. They pretty much have a local monopoly on Electro-Swing, a genre which is huge in the States, big along the South Coast and in London, with devoted, high-energy fans. ESC made a whizzbang start with twostonking videos, making them permanent fixtures in the six-monthly Radio To Go video rankings. Since then, there's been an album, and a steady development of their associated brands, like Swingamajig and Hot Club De Swing. But it's been extremely hard work. The workload, along with the day jobs, can be close to overwhelming. They have a plan for that too.

When I spoke to you last, you painted an impressive picture of smooth, calculated steps, touching on the band's business structure – a co-operative – and development plans. On the surface it's looking good. For example, you've recruited a veteran outfit, The Destroyers, for your latest Swingamajig festival. They've been going for close on a decade, while you're still young whipper-snappers.


I think it's fantastic. I've been a fan since forever. The three headliners at the festival – Destroyers, Electric Swing Circus and Molotov Jukebox, from London – all fit together. The funny thing is - I can say this hand on heart – that we are on track, absolutely, since we  formed in 2011. Honestly, I don't know how it works. My skill is being surrounded by very good people.

But you have a string of mutually supportive interlocking enterprises as well. Not everyone can boast that. Often, outside activities get seriously in the way, rather than reinforcing.


Absolutely. That does really help. But to be able to do that, you have to be a bit of a workaholic; you have to sacrifice your personal life and your work life...  That doesn't come easy. I don't have days off, and it's morning to night every day. I'm either gigging, or driving, or emailing and planning, negotiating...

This ties into some interesting conversations I've been having recently with people in the local music industry. The core point is: we've got more and more terrific bands and acts, with a hell of a lot going for them: it's wonderful. But the big challenge is: how does those bands and acts raise themselves above the static? How do they stay focussed and on point?


It's a difference in commitment. We're in our twenties and thirties. So, loads of our friends are getting married. We don't go to our friends' weddings – so we can play shows. We don't take weekends off in the summer. If one person in the band takes a weekend off, the rest of the band can't play a show, can't earn money. This year we will take two weekends off – because a member of the band is getting married, and we will all attend.  That's it. I would make the additional point that, yes, I am very busy, but so are the others, too! We are a six piece band – we can only play when we're all available.

Stressful. Do you not run the risk of eventually wanting to kill each other?


Yes. But we're very good friends, so that lasts when we're out on the road, not getting any sleep.

OK. But that may get worse the longer the band goes on. When bands split after decades, there can be some be some pretty deep and savage rifts. So let's talk about the lifespan of the band. How long do you expect to be around?


It will go for as long as it goes for. I'd be upset it if doesn't go for ten. But thirty? How can you tell? You can't talk about that to people when the band starts out.

But you are, explicitly, a business. Does that not imply a take no prisoners business attitude?


I don't think you have to be nasty or steely to have a businesslike attitude. I'm a big believer in not doing that. I want to be a professional and successful musician and business person. But I really don't want to be a dick-head. People say you have to be a complete asshole to get on in this business, and you don't. I would like us to get where we want to get to because we're really easy to work with, really fun people, good to be around. That's our business plan. You should think – this is my music, this is what I want to do. Now how can I make that, without changing it, into a source of income?  If you lose the magic...

Well, I can think of dozens of bands who repositioned themselves with massive success.


Well, musicians grow up and they change. I'm not saying you have to stay the same.

Fair point! But how have you changed over the past three years?


We've grown up a little bit. We're starting to hone in, I think, on a sound. The album was our first statement – this is what we do. A lot of people worry that Electric Swing Circus, doing Electro-Swing, are backing themselves into a corner. That's nonsense! There's so much depth that people haven't considered exploring. It's such broad genre – it's not bpm-specific. We're not stuck at 70 or 120 or 140. We can do whatever we like. The only criteria for me is that it has to hark back to something pre-50s - swing. That could be a trumpet sample, a drumbeat, anything.

Of course, the term Electro-Swing will go out of fashion. Names and labels always do.


I really wish it could be called Vintage Remix! It's been done for years. There are really big cuts that get played at Electro-Swing nights. It's come from Drum and Bass. Jazz House has been around for a while.  Now people are remixing close harmony 1920 accapella groups. There's a lot going on.

Let's talk about Swingamajig. This is the biggest event you've done. Will it wash its face?


We've had licensing problems, so we've had to move venues at the last minute. Financially, that's pretty ruinous. However, we are on track to sell out. That means, in this case, just past break-even. It shouldn't have done, but because of the venue change, it does. But I am very confident that we will not lose money. We will have 2000 people at the show. Next year we want to move it forward to get to to a sustainable business level.

Gigs for this summer?


A lot more small festivals – but we're headlining. I like that a lot. We're touring Europe a lot more too: Germany, Holland, Belgium and Switzerland. We've moved up a bracket. The only thing that's really missing is a few more early day main stage slots at the bigger festivals. We've got Boomtown – I've got a lot of love for Boomtown. They listen to everything. They picked up on us from year 1, and now we've got a main stage slot.


We're working on that, but it's hard – working Monday to Friday and gigging Saturday and Sunday, it's really hard to get time away to write.  When we do get that time we work hard. We have the bones of five songs ready. We want to really really nail it on the next album. We want the best we can do.

So you need to build some writing time into your schedule


Not a problem at all! Because come June, we are going professional. And that is my big news!

Well done. The next big step! I presume that means a drop in income to start with?


Giving up the day job? Yes, it's going to be really tight - a lot less money. It's a little bit of a gamble. But if we don't do this now, we won't progress. You need that commitment. There is only so long you can carry on working two jobs.

You're taking on all the risk. No sugar daddy, no record company advance – not that that ever means a fair and supportive deal...


Exactly. You are facing the dilemma a lot of bands around town are trying to deal with – when do we take the deep breath and dive in, mortgages, families and all? We've got that.

We need to revisit this. Talk in a year of so?


Sure! Can I say one more thing? With the band, DJ Switch, The C@ In The H@, Hot Club De Swing, Ragtime Records and Swingamajig, it's starting to become a major scene locally. I'm really keen on Birmingham, and doing more in my local city. So can I say: DJ's, producers, musicians, bands.... there is an industry around Electro-Swing that's been built up. Come and talk to us! I can't guarantee gigs, but we have a regular club night and a festival that I programme. We've got a record label here, and I've got good links across the UK and Europe. I am really really interested in supporting new music – djs as well. So consider Electro-Swing, and we will do our best to help!