35 years ago, Punk was front, centre and huge. Bands who couldn't play, snotty and sneering, drenched in audience gob.

Of course it was choreographed, but it was a great bandwagon for some. The Police, Squeeze, Bob Geldof and even Tom Petty used Punk well to get themselves noticed.

Down the pecking order, Punk really mattered. Local hopefuls? Dansette Damage, Suburban Studs, Spizz, the Killjoys, Dangerous Girls, the Prefects, and more. Most faded away, of course. But this was real and valid to those who were there. The recordings survive, but now they're out of time and context, and there's nothing to hook them to.

Neon Hearts were a bunch of snarling young bucks from Wolverhampton, who went further than most of their contemporaries. There were record deals, splits and relaunches, iffy attempts to commercialise them, and so on. The original line-up called it a day maybe 30 years ago. From that line-up, only Paul Raven made a career in the industry, going on to Killing Joke, among others.


But now, a reformed Neon Hearts are off to Japan, touring to meet a demand which has, extraordinarily and completely independently, sprung up as part of Japan's style- and niche-obessive youth culture.

Brutal question: why would a bunch of old punks reform, when it was all about youthful rebellion, giving the finger to the establishment and all that – and you're in your fifties?

How big did it get for you, back in the day?

Keith It got to the point where we were gigging all the time. We never got out of the country. We knew our music was going out across Europe and Asia, and such. But we had no idea that it would pick up the way it has. We used to run a gig in Wolverhampton, at the Lord Raglan, when we first started. We hired the room at the back and put bands on. We'd play once every five weeks or so. It became a regular night.

So, years and years later, one of the guys who used to come to the gigs, called Miles, contacted me through Facebook. He'd moved to Japan. He messaged me: 'Are you the Keith Allen who used to be in Neon Hearts?'

I emailed back 'Yes I am, who are you?' Miles told us we actually had people in Japan who would actually like to see us play. We had a bit of fan-base...

And this is now? How the hell did that happen?

Keith Miles was in a club, and this Japanese guy walked past wearing a Neon Hearts T-shirt. Turns out there's a whole scene around us. They've all got the singles, the T shirts....

So Miles got back in touch. He was thinking of putting together a tribute CD with Japanese bands playing our stuff. And he did. It's called Neon Japan, and it's not bad with some interesting versions of the old songs. It was great of Miles to put it together, and we will always be grateful to him for taking the time to do this.

What's so interesting is – how has your name survived all that time? How have your records stayed in demand, after all these years. You haven't seen any money out of all this, have you?

But there are singles and albums to buy? Somewhere, somehow your stuff struck a chord.

Martin Culturally, if they get into your stuff, they get into it to Mastermind level. And there's a great leveller. The difference between the Sex Pistols, the Buzzcocks, the Lurkers, Neon Hearts, the Boyz.... it flattens out. If you have a record out, you exist. Record sales, and popularity as we measure it doesn't really factor there. They're more into what you look like, what you sound like, and everything is judged from an even keel.

But your name has lived on because there's been audio...


Martin Yes. Keith and I went over there after finding out this had happened, met the bands. How did they hear of us, how did they know us?' One guy from Wasted said he started playing the guitar because he heard our stuff. In 1980.

Japan 2011: Keith and Martin live, with a string of admirers 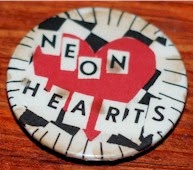 Keith Look at this badge. When we first got together, Tony did the design. We took it up to a printers in Wolverhampton. Button badges were the thing in those days. We printed up two hundred, gave them away at the first four gigs. That would be at the end of 1977. We never saw them again. We saw FOUR of them in Tokyo! People brought them to show us. They'd found them on eBay. The fact that there's even a market for this stuff is incredible.

Martin People were bringing us seven inch singles for us to sign. We never made those – our first single sleeves were made too big, by mistake. People came up to us with Neon Hearts stuff, and asking us if it was 'real'. They'd been paying ninety, a hundred quid - for bootlegs.


Where did the money go?


This prompts me to ask – who has the rights to your stuff now? Clearly, someone's made an awful lot of money out of your name. Is there any way you can assert your rights?

Keith It's an interesting debate. Steve Harrington, the other original band member, is chasing that up. On Amazon, there's a CD from the original record company, Satril, in their latest incarnation. We have no idea if it's selling, but the fact that Satril are marketing it must mean there's money in it.

We've been in touch, and the word 'perpetuity' has come up around our rights. We never signed anything like that.

Keith We were only 18.... My dad thought the contract came out of a Dickens novel. But there's a whole area that was never mentioned on those old contracts – digital rights. We just don't know if the legal fees we'd pay to claim those rights would pay off in royalties.

The tragedy is that those contracts you signed, age 18, have lived on. For 30 years, people have been making money off your stuff. And you haven't, which is disgraceful. At least the name is still there - so maybe you can get a slice of the pie now?

Keith Well, we're looking at publishing and PRS, so we can start again with our new stuff. And we need to be in a position where people who are exploiting our stuff can be told to stop.

So you're going to assert your rights?

Keith We will. We were only kids then. We're not now. We did get advice, but...

Tony  I don't think we can blame anyone. We were wildly enthusiastic. As soon as anyone showed us some interest, we were there, 200 percent. Pizzas and Beer? We had a deal.

Martin  Now we're using social media under the guidance of Ed (Ed Johan Bol), our newest member. We put a track up, and had great reaction. Marvellous. It’s getting us lots of coverage.

The new and dangerous Neon Hearts on Soundcloud

None of those guys who exploited our old material have any control or interest. It's back in our domain. When we publish on iTunes, it's ours. It's what we wanted to do in the first place, when we did our first single. That concept is now alive today – now, it's possible.

I don't think you can stop yourselves being bootlegged all over again though. But the old material is still yours – it gets you the gigs.

Martin It does. And it's all about driving people to your gigs. When you've got them there, you've got all the merchandising, the T-shirts and CDs. When we play live, we've got a mix of old and new.


Getting what's yours and getting on tour


I don't expect you'll be drenched in spit this time around...?

Tony Thank God, no. The good thing is you can see who's interested in you with social media. By a long way, the main demographic is Male and 45-54 – so if they come to the gig, they won't be able to pogo up and down anyway!

And there's gigs in Japan to come?


Martin  We're going over in April to do a tour. When we went over to see Miles, Keith and I played with the bands on the tribute CD. And that sort of started us back again. We're kicking off in Yokohama on the 24th of April, there's seven gigs running though to Tokyo. It's humbling, when you go to Japan, because of the level of knowledge they have about what you did. They genuinely want to know everything about the band and the songs – how to play it. All of it. Who we met and worked with.

What are you expecting to get out of this?

Keith Fun. It's humbling, when you go to Japan, because of the level of knowledge they have about what you did. The genuinely want to know everything about what you did – how to play it. All of it. Who we met and worked with.

We want to play the new stuff, and you can guarantee that people will want to know the old stuff. So a lot of the set has to be the older stuff. So we want to get an ep out soon, so people can get used to the new stuff. Which, by the way, we are really excited about. It's not about doing a few gigs for the money.

What a lovely story. Everyone likes recognition, and when it arrives later in life, it's all the sweeter. However, unknown to the band, a number of people have been making money from their work, and they haven't. I've lost count of the number of times I've heard that story. Hopefully, Neon Hearts can use their new platform to start to rectify that situation. Newbie punks might do well to take the right steps right now.

Two things in that interview stood out- bootleg products and the original label possibly still making money from the deal.
If I was a loyal fan (Japanese possibly more so) I'd want to make sure the band I love gets their just £, my £ goes right place and I get genuine items.
So I felt it was a really good (yet subtle) message (about the bootleg and old record label and fair deals at age 18 etc etc) to get across to the fans. Fans don't know this stuff till they're told plus a lot of them don't understand how musos get shafted so they unknowingly feed into the process while getting exploited too.
Even if the £ isn't important to the band I think it's good info to have out there and loyal fans will appreciate it and the band benefits ultimately from the energy created through that following (this Japan story being such an example!)
So....was good content in that interview and might be worth updating if you uncover more on the old contract/ album side of things.

Lena, you're absolutely right. Sadly, this has been going on since time immemorial. The key is to realise that from your very first song on in, your work can become a source of revenue to third parties during - or after - your career, and to take the steps to make sure that revenue comes back to you. That's most something most bands completely forget to take care of in their rush to get ahead...