The Selecter at Reggae City in May: It's not the same old show

Pauline Black talks racism, sexism, 2-Tone, Ska and Reggae, re-forming your band, keeping it punchy, and not wallowing in black and white nostalgia. 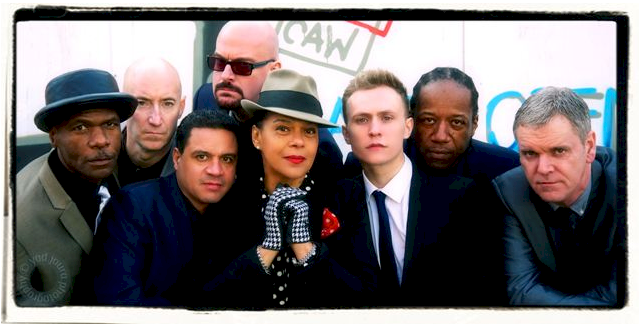 I’m not absolutely sure, but I'm probably the first (legal) radio DJ to put The Selecter on air. We used to do sessions at the old BRMB Radio, recording up and coming bands just as they came to the boil. This included UB40 and the Specials, pretty much all in quick succession, in 1979 . It worked a treat: the station scored great listening figures and got to look - very unusually for the old BRMB - hip and cutting edge. And the bands got exposure and MU scale cash. Everyone was happy. It worked. Just saying...

So, back in the day, Pauline Black came in for an interview to tie in with the session. Now, Pauline Black’s on the phone ahead of a string of midlands dates - you'll find them at the bottom of this post. 34 years on, The Selecter is touring again, and a stroll down 2-Tone lane it ain't. Two new albums, new members to go with founders Gaps Hendrickson and Black, a richer mix - and the same fierce attitude.

2-Tone was a youth movement fuelled by Margaret Thatcher’s ow and where does The Selecter fit now, well into the 21st century?

The Selecter fits in the 21st century because throughout that period, whether in or out of The Selecter, I’ve very much kept to a palette of black and white, exploring the twin issues of racism in society and sexism – which also was part of 2-Tone.

How have attitudes shifted over the past thirty years, in your view?

Those things haven’t gone away. They may have shifted ground; maybe ground has been gained. But nonetheless, neither of those two things have gone away. The original Selecter was a seven piece band, predominantly black. We were viewed with some suspicion, unlike, say, Madness.

Well – young black people, in bands, talking about racism…? You only have to look at bands like Steel Pulse. That wasn’t necessarily what people wanted to hear. They far more wanted to hear things like ‘Our House’

Big in the Body - The Selecter's first comeback single

Talking racism, I always felt things definitely got easier through 2-Tone and events like Rock Against Racism, which brought Punk and Roots Reggae together. Pauline agrees, but with some reservations.

Well, racism and sexism have not gone away – even though we all are more connected than we were.

I used to get stopped at customs on my way back into the country after playing abroad. The way I think the customs see it is this: All bands have drugs, irrespective of whether they’re white or black; if there’s a female with the band, the drugs are probably with her. And therefore they search. They used to poke around in my make-up pots and all kinds of things. So on the one hand you’re being stopped because you’re black, on the other you’re being stopped because you’re female, so you’re the mule.

It’s a long jump from the late 70s when you were a set of young firebrands. Coming back into it now, what have you done and what have your colleagues brought to the new Selecter?

I never stopped doing it. I did some acting in the 80s, but things were very against anything that smacked of 2Tone at that point… two people and a synthesiser was so much more economical for a record company that seven people! Music was made though out that period.

The difference now is that myself and Gaps Hendrickson, the original leader of the band, came back together to celebrate 30 years. We didn’t just want to do all the old hits for that nostalgia market. We also wanted to push ourselves and see if there was something we can say about today. And I think that has been to our advantage. One, we had nothing to lose; two, we’ve built a really solid and sound unit, and a good following.

Unlike some bands that come back and kind of put out a half-hearted album they they kind of believe in but not really, we very passionately believed in the ‘Made In Britain’ album and the new (String Theory) album – and that’s carried the audience along with us. We’ve just added half the new album to our set, and it’s quite seamless.

When I was doing a bit of research before our talk, I ploughed through YouTube Selecter clips. There’s a lot of new stuff shot from the audience – jumpy, bad sound. It doesn’t always help, does it?

That’s the age we live in – you spend half of the set looking at people viewing you through their iPhones. It’s bizarre. They don’t know how to edit; things go up there warts and all…You just have to get used to it: seeing yourself from afar with the worst sound in the world, and somebody’s bald head immediately in front of the camera. I still don’t really mind. It’s kind of levelled everything.

You made the interesting observation that of all the 2-Tone bands, who fed on West Indian and Jamaican music, the original Selecter line up was unique in being predominantly black. And in your autobiography you talk about black consciousness, being raised in a white family, and how that – it couldn’t have done otherwise – helped form your views on race in the . And yet you only discovered later in life that you were half Nigerian, and half Jewish. How did that feel? 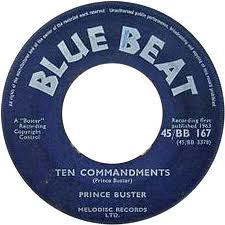 The thing that most changed my perspective was this. My (Nigerian) father unfortunately had died a year before I had the chance to meet him. His elderly wife gave me a few things that he owned.

One of the things she gave me was a version of Prince Buster’s 'Ten Commandments'… and it was a Nigerian copy, a seven inch single! You couldn’t have made that up. But when I was conceived, that music was beginning to filter over here … but it was the first time round.

How interesting. I’m conditioned to think everything comes to the and we can pick and choose. That really hasn’t been the case for a while now, because of the net. But here’s an example of this happening – to - from the 60s. Wow. OK. Tell me where you're going next?

We want to reflect the interconnectedness of things now. There is a string that attaches us to our past, but it’s following on to the future. That’s where we want to be going. I want to mature this band to tour internationally. We were in last year. We’re going to go to the States three times this year, taking that message out.

I’m hearing deeper reggae grooves in your new material... and you've got horns in the mix.

Well, we’re going out with a band called Talisman. It’s a great fit. Our show next week has Zion Train. It came to use a couple of years ago that we really enjoy reggae. And reggae sets us up to come on stage. Our audience is different from a Specials or a Madness audience. And they’re quite receptive to listening to reggae. It works brilliantly. Everybody’s friendly. And everybody’s up for it when we hit the stage.

There was more - a lot more, we talked about; too much for one blog post. Half an hour of rapid-fire ideas simply whipped by. Pauline was great; I've had some brilliant conversations for this blog over the past couple of years or so. This was right up there with the best of them.