Don't you point that thing at me, pal #4: Steve Gerrard @ Brumlive

It's not all about spraying and praying... there's detail, there's action, there's a story 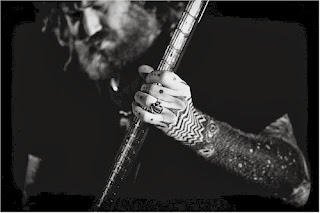 I don't write gig reviews. There are excellent West Midlands sites that do; you'll find links to several down the right of this page.

One of these sites is Brum Live, run by Steve Gerrard the long-established music photographer. Brum Live exists partly to be a platform for new photographers and writers. If that interests you, there's an email address at the bottom of this post.

Steve is a details guy. Just look at this shot. He's done tons of big names, lots of local guys, and he still prefers smaller gigs. It's all about the gig, the musicians, the crowd, the interaction... the action. All shots are reproduced here by kind permission.


It tends to be the smaller gigs. You’re right in there with the audience. You never know what’s going to happen. There’s a lot of bands – great bands – but once they get on stage, they don’t really do much - they get up there and sing their songs. There’s bands I really love – Kings of Leon, The Strokes, Queens Of The Stone Age – I could listen to the all day long, but once you get to the gig, there’s not much really going on. I’ve actually walked out of a of the Stone Age gig, because there wasn’t much going on. There’s other bands – Let Live for example, where I feel like I’m missing out if I don’t see every gig they ever do.

So how can you stretch beyond that – deep into the event, which is what you like to do?. You’re in the photographer’s pit…

… and that limits your angles. Below the stage, lighting completely out of your control…

There’s not many forms of photography where you have as little control over what you do as music photography. You’re restricted as to where you can shoot, how long you can shoot for, maybe only three songs, sometimes less. They won’t let you use flash, so if it really dark’, you got to think differently. So you really have to go for it and be as creative as you can within those parameters.

Do you have to give away rights to get permission to shoot?


There are a few bands these days that issue contracts which give them the rights to use your stuff for any reason, without payment, in exchange for the right to shoot them live. A good chunk of photographers would never sign anything like that. I would count myself in that group. We just call it a rights grab. It all depends on how much they want to get from you. Sometimes it’s unfair and disrespectful. It’s surprising, the bands who do issue these contracts. I know photographers who’ve turned up, seen the contract, and gone straight home. But then I’ve shot bands like U2, and others, some of the biggest bands in the world, and there’s no contract to sigh whatsoever.

If you do retain the rights, which you want, it’s your living… is there any quid pro quo? What is the etiquette if the band asks you nicely? Isn’t that tricky, after they’ve given you access?


Well, Let Live just asked me if they could use one of my pictures as a press shot, to advertise their new tour. But they had no budget, so all they could do was credit me whenever they can.

Now, most of the time, I would say no, this is my living. If photographers did that all the time it would devalue the process. And this was a band portrait, it was something I set up, and edited in a certain way, and all that. Because I’m a huge fan of the band, because I’d met them, hung out with them, and they’d given me certain access, I did them a favour and agreed. But most of the time I wouldn’t – it’s my job..

It’s a very interesting issue. Bands are constantly being asked to give their music away for free. In the internet economy, pay for services rendered is dropping like a stone all over the shop.

But if everyone gives it away, the industry will collapse.

Exactly so. So what about kit, which you need to earn money to pay for?

I usually have two cameras, with different lenses, so I don’t have to change lenses mid-shoot. I use Canon 5D mark 3s, with prime (fixed focal length) lenses. A long lens and a wide lens. One on one shoulder, one on the other, When I’m shooting a wedding, it’s the same.

How much do you shoot?


Depends on the shoot. I just photographed KT Tunstall at Symphony Hall. We had to shoot quite far back in the hall, over to one side. So there I used my longest lens. We were quite restricted: as good as she is, she pretty much stands in one place. There’s no other band members. So once you get those first few shots, it’s hard to get more variety.

At other gigs, if we get a full set, I might take three or four hundred pictures, If the lighting’s tricky, I might over-shoot a little bit, just to be safe. And when the band’s moving around fast, you might take a few more because a split second can make a difference. That’s the beauty of digital. It’s a long time since I worked in film, much as I love it. I do shoot film for personal stuff, though. It’s good to remind yourself about waiting for the moment. There’s a skill to that, as opposed to spray and pray.


About 2005, I started shooting concerts. Started working for the NME and people like that. Once my name started getting out there, I got emails from people asking questions about the business. And one question that came up again and again, was: ‘How Do I Get Into Music Photography?’

I was emailing back…and I had a basic email that I cut and pasted to save time. One of the things I said was: If there’s nowhere for your work to be seen, it’s hard to get a photo pass. And rightly so, when you think about it.

One day, I was sending this email off, and I thought: there aren’t a lot of outlets out there. So I had this idea of starting a local blog, where local photographers could then justify getting their passes. The way to do that is to feature their work hopefully a consistent standard blog. We then started asking around to see if people would like to write reviews.

It’s a good platform, then

Yes. And some people – photographers and writers - have gone on to greater things. But we do it for the love of it. The bonus is we get into gigs for free – not all of the time – and we all chip in to pay for the upkeep of the site. I do most of the applying for passes, and most of the time, we get them. We try to keeps the standard as high as we can.

Will you critique someone’s work? If they don’t get on the site, you’ll tell them why?

Who have you yet to shoot that you haven’t yet shot?

Until recently I would have answered Pearl Jam – my favourite band. But now I’ve shot them three times. I could always say the legends, the staples of music history. Of the new breed? Nobody sticks out

What’s given you the most satisfaction in the last three months?

I gave myself a goal to shoot more band portraits. I’m happy to say I have. Whether it’s local bands on a tight budget, or bigger bands. I feel like I’ve accomplished something there. And as a music photographer today, you might be shooting band, and you don’t know where they’re going to end up in twenty, thirty years’ time. It’s about capturing that moment.


See more posts on photography on Radio To Go