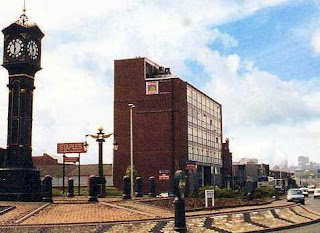 However, do read on: I have some corking stuff to tell you about.

All this week I've been doing research, going back to the early 70s when the old BRMB launched. It's amazing what you can get up to in 40 years, good and bad. In my  dusty files of old press cuttings and memorabilia, I found random stuff I didn't even remember filing away. Quite a lot (too many) pictures of me gurning hopefully at the camera with a group of peeps to plug an event or another. A lot of these were deeply worthy projects that, suddenly and quite miraculously, got the station's philanthropic support... when it was franchise renewal time. 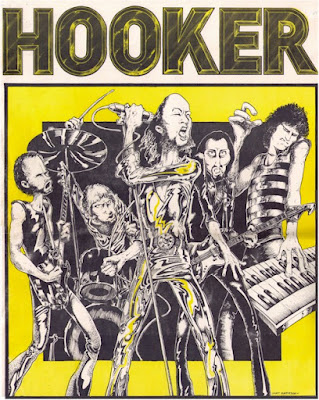 But, look! Here's a white label 7” vinyl of a song we recorded at Zella Studios for the Walkathon. I'm bringing that with me on the night.

There's some fantastic posters that the great Hunt Emerson did for wonderful Birmingham 70s bands who should have gone further than they did. Here's Hooker, who were done for by the arrival of Punk. What a fabulous  piece of work, Mr Emerson!

Aha! here's the menu for a promo night Sony Records laid on for us meeja types: a ridiculously posh dinner at the Guildhall in London for Michael Jackson. We weren't allowed to talk to him, of course. Talk? Even getting remotely close would have been a fine thing. At the end of the evening, we were shooed out into the Guildhall courtyard. There we watched, I kid you not, a knight in shining armour, on horseback - a white Andalusian stallion, mind - clip-clopping into the courtyard to pull a stone from a sword and then present it, on one knee, to Jacko. That's how it was at radio back in the day. Now, my successors are lucky to get a promo mp3. At least I get to make gags about horseshit promo stunts...


I was so much older then

I even found a couple of press clippings from Variety about the station I worked at before BRMB: WPHD-FM, an upstate New York rocker, which almost by accident led the ratings for one quarter in 1972. Why? We were on FM; we played album tracks from the Stones, Beatles, Joni Mitchell, Led Zeppelin, Sly Stone, the Allman Brothers and more in heavy rotation. That was exactly what a young US audience wanted at the time.

Back in the UK, I seem to have done lots of very serious interviews. Of course! I was an intense young man then, totally unlike the intense old man I am now. Once BRMB was established and I became junior management, I spent a lot of time in print interviews fending off accusations of being too commercial from thrusting young media students. Ridiculous when you think about it, as that's exactly what the old BRMB was: a commercial station. Although I was tickled to see I'd cited The Wonder Stuff as having local chart success. The horror of it all: a local band doing well in its own area.

There's plenty more, but I'm saving some really juicy ones for Thursday 24th. I've got stories both heart-warming and deeply embarrassing. And I am quite sure that John, Jenny, Tom and Les have a sackful of similar tales.


I also need your help with this 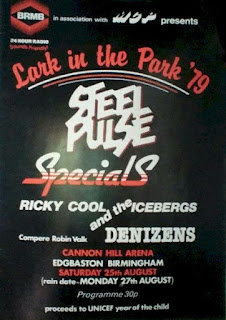 I spent a particularly fraught afternoon and evening at the 1979 BRMB Lark In The Park - I'll share the full gory tale at our nostalgia fest.
I have the original programme; here it is. But I don't have any photos of the event, dammit.

If you were there, or if you know of a web page that carries shots of that day, I would be deeply grateful if you could get in touch. There's an email link at the top of this page.

That's just some of my perspectives. Now consider what Tom Ross might talk about. Villa glory days, maybe? Or Les, or Jenny, or John... We all have our stories. Happy days, although I didn't know it at the time.


Don't look back in anger? More like joy and mortification


It tickles me to think of the impact that a bunch of radio innocents had on 70s Birmingham. If you remember all that stuff, come on down. I'd love to see some of the people we recorded for those early BRMB band sessions, and I'm sure John feels the same way.

This may be the first of several nights. I hope so. We thought long and hard about how many people we could squeeze into the performance space at The Kitchen Garden. The five of us will be, er, unnervingly close together on the night. But there are lots of people, old colleagues, who could and should tell their stories. That would recognise their work, and deservedly. And as I mentioned, we will be honouring an old colleague, Ed Doolan... who actually followed me into BRMB. Yup, I was there before him. That fact alone is amazing in itself.

If this works, I look forward to sitting in the audience and heckling cheerfully at the next event. 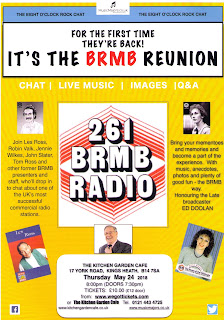 Present and incorrect will be Les Ross, Jenny Wilkes, John Slater, Tom Ross and myself.

We're all doing this for free: proceeds from the evening go to Alzheimer Research and the Ed Doolan Memorial Trust. Advance tickets are a tenner (get them here), or its £12 on the door.

You're welcome to bring your own memorabilia, but I'm still looking for shots from Lark In The Park at Cannon Hill Arena.
The event is promoted by Eight O'Clock Rock Chats.


See also my associated post on the old BRMB from last month, an Ed Doolan appreciation post, and other radio stories on this blog.

Ah happy memories - listening to John Slater on BRMB evenings, with all the best new rock stuff and details of the gigs I'd head up to Brum to see. And you on Beacon doing similar stuff. And Dave Jameson on Sunday mornings playing Numbers 27, 18, 12, 7, 9 and 2 (or something equally random) from the chart of that week's chosen year.

Radio's all so different now. I'm, glad I was listening to it in its heyday.

Good luck on the night!

Very kind of you, Gavin! One correction - I never worked at Beacon. I preceded John Slater on the Rock show, launching it in '74