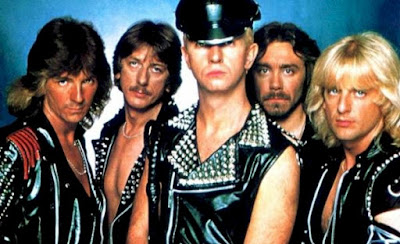 Hey, Mr Producer, what were you thinking of?

Personal opinion time: the album was not, is not, remotely representative of the Judas Priest we know today. 'Rocka Rolla' was a ghastly sub-progrock effort, cut on a budget and poorly crafted. It came out on Priest's first label, Gull.

Not having seen Priest, I had no idea how off-target the album was. But record company manipulation was not unknown – when Leicester-based Family cut their first album, 'Music From A Doll's House', it was a world away from the powerhouse blues style the band had developed live.

In the event, Priest's album flopped. The next album edged rather closer to the eventual Priest style, but still failed to set the world on fire. Then the band headed to CBS/Sony, cut 'Sin after Sin', and broke through. I opted, pragmatically, to give my audience what they wanted: the new stuff was definitive and more successful by a country mile.

I'd also had the pleasure of watching Priest guitarist KK Downing deliver some blistering and deeply impressive work to lift the tone at a benefit gig. That act rather changed my attitude.

Before then, our paths had crossed at Barbarellas, the old Brum Rock joint. I was booked to DJ there on Sundays. It was pretty much a local band residency series. I got fifty quid a pop, more than my then weekly salary at BRMB.

Posters went up all over town to advertise one specific gig. Judas Priest were headlining, no support. Rather lower on the poster, in small letters, there I was. Oooops.


There I was, the radio jock who snubbed their first album, supporting a band who had no reason whatsoever to treat me cordially. They also had, I knew by then, a pretty passionate local following.
I can't remember whether I had any words with the band before the gig, apart from asking them how they wanted to be brought on. That agreed, I warmed things up with a metal-driven set. Big crowd – the place was heaving.

I used to go to Barbarellas 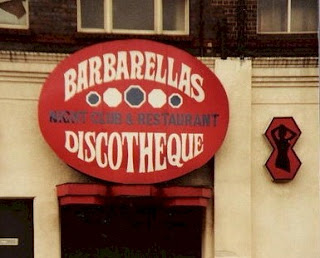 Older hands will remember Barbarellas. It was a long, deep room, with good sight lines from a bar on the right hand side and a raised standing area at the back; the moshpit was up front, with the DJ booth on the left of the stage. From the booth, you could get onstage or head back to the dressing room. The booth had its own mic; I usually brought bands on using that.

Showtime. I decided to show some respect. Thumbs up? Yes: Priest were good to go. I left the booth, walked centre stage, the band in place. A quick, punchy spiel, and off we went.

A HUGE amount of pyrotechnics fired up to start the set. Rather a lot seemed to be around the DJ booth which I had just vacated. No matter; there was so much smoke generated that it took half an hour before the smoke cleared enough for Priest to emerge from the murk.

They delivered a perfect early Priest set, their last ever at Barbs, as it happened. Ears were ringing in Brum for days afterwards. And I was left wondering of the pyro was cock-up or... conspiracy.

Fast forward a couple of years. Several Gold albums later, Priest conquered the world. They were in for an interview at BRMB – Rob Halford and, I think, KK Downing – and I was, as always, glad to have local stars in for a chat...


I got something to say

Before we started, I wanted to clear the air. I explained that I now felt rather bad about my non-support of their early work. It must have been hurtful. In those days, early airplay normally came on a local station, and it was important, a morale-boosting moment for any band. So I had been tactless at best.

No problem. Rob and KK were completely gracious, to my enormous relief. As it turns out, they had by then repudiated their early work. It had been recorded catastrophically badly; they thought it was terrible too.

Gentlemen of Priest... I salute you.


Stories? I got stories


I'm telling these stories now because they're too good not to tell. I've been doing research for several projects; up they all come.

The most immediate project is a BRMB Nostalgia night at the Kitchen Garden Cafe on Thursday week, 24th of May, where I am joining Les Ross, Tom Ross, John Slater and Jenny Wilkes (all of us doing this for free, since you ask) to recall the old days of that long-gone radio station, and raise a bit of money to honor Ed Doolan, with proceeds going to his memorial trust and Alzheimers Research. It would be lovely to see you there. Get advance tickets here.

£50 for your DO gig, blimey Robin, Bright Eyes never got that much and there was five of us lol.... Take care.. Keith

Keep on doin' what you're doin' I say!

Hi Robin, one of your old review crew here again. I seem to recall that the bar was on the left of the club as you were facing the stage. Maybe if you were looking from the stage it would have been to the right.....

Nope. I'm adamant that the dj booth was on the left of the stage as you faced it, with the raised bar (remember the sticky carpet?) on the right.

The Railway Revisited.
From the 1960’s to the 1990’s The Railway Pub in Curzon Street Birmingham played host to hundreds of bands, seven days a week. Some were hopefuls, and some legendary. To an upcoming band, the Holy Grail was a weekly residency at the Railway. Mondays were entry level, Saturdays the pinnacle.
The most famous act ever to appear there were arguably AOR giants Magnum, who have recorded for CBS, EMI and Polydor. There also appeared Steve Gibbons, Trojan (later to become RCA recording artists Shy) Hamburger Mary, Briar, Trouble and NWOBHM* acts such as The Handsome Beasts, and Jameson Raid.
Many thousands of people attended gigs there over the years, sometimes the band would be playing to three people but sometimes there would be hundreds there.
The effort that went into playing the Railway Curzon Street was legendary. A full PA system with mixer, road crew and a lighting rig were the benchmark. The only money received was charged on the door at perhaps £1 or £1.50 per head. Huge losses were involved on the night if you were hiring the equipment and trucking.
The site of the Railway Curzon Street, long demolished, sits on the edge of Millennium Point, and there is nothing there to mark the spot, not even a blue plaque.
But, the RAILWAY IS BACK, I am happy to say. Kindly hosted by the folks at the aptly named The Railway - this one in Hill Street B1 1PU - a Railway reunion night will take place on Thursday July 5th 2018 from 8pm to 11pm. This Railway also played host to the Bogarts reunions, and is itself in the vicinity of where the legendary rock club Edwards No 8 and the Grapes rock discos stood.
Admission is free, and the band are not even being paid, though there will be a whip round to help offset expenses.
The power trio English Electric Lightning will play on July 5th, and if successful it will be repeated regularly, and we will see who we can get to RE FORM!