Hold on to those band snaps! In 50 years you could be sitting on a gold mine.

Don't you point that thing at me, pal... Number 6: Jim Simpson

You can cover an awful lot of ground in the music biz if you stick at it. Now probably best known for running Birmingham International Jazz Festival, as a young sixties groover Jim Simpson was eking out a living as a semi-pro trumpet player, a band manager (Locomotive, Black Sabbath, and others)... and, significantly, as a part time snapper, selling photos wherever he could. 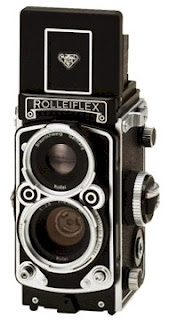 All this was long before the advent of digital. Jim worked with a lovely professional twin-lens reflex camera, very similar to the one here. I had a very cheap version of Jim's pro kit back in the day, and I absolutely loved it. Twin lens machines used conventional film, in the now very rare format: 120. This usually means square negatives, 56 millimetres along each edge: vastly larger that the smaller and faster 35 millimetre format.

The downside? A larger, heavier, much more unwieldy camera, into which you normally squinted downwards, rather than at the subject, to compose and focus. More often that not, you had to work with a degree of formality. These weren't machines that let you grab images on the fly. And as we've already seen with Pogus Caesar, you could only fire off 12 shots before you had to change the film.So you took more care over your precious limited set of images. The upside was super image quality, which then meant terrific enlargements.

Jim shot a lot of stuff, half a century back. Some of his best images are now on show at Havill and Travis, a new gallery in Harborne, South Birmingham. The gallery is a joint venture between Gerv Havill of Moseley Folk fame, and Dave Travis, also a photographer and onetime promoter.

At the preview, Jim was happily running though old memories.

I had no idea until I knew of the exhibition that you ware also a pro photographer.


Yes it kept me alive. I went seriously into it at a rather stupid point when I should have been paying more attention to Black Sabbath, who I was managing then.

You mean you didn't take any shots of the band in their extreme youth?


Only about six shots in all the years I was with them. A bit of an omission.


I thought Roy Wood's fringe was a hat, actually. A hat made of hair. That was the first publicity session they had. It was very early in the morning, and it was very cold. They're all wearing college scarves. I don't think they went anywhere near a college. Bev (Bevan)used to drive past a college on his way to work.

Let's move on to the Moodies...


Ah. That was at the Carlton Club in Erdington. It eventually became Mother's, of course.

Named after the brewery, weren't they? The Mitchells and Butler 5, or the M&B 5, I understand.


I was in London then, and the first thing I heard from them was their cover single of Bessie Banks' Go Now...


Well, they were an R&B outfit. This line-up, they all came from major bands in Brum at the time, except for the drummer, who managed them. The guys who owned the Carlton Club got behind them, so they could be put before the Friday night crowds there. They were a major local draw, very early on. The sad thing is that the bass player in the picture, Clint Warwick – that was a stage name – after a couple of years, he thought 'I don't Like This', and he left the band, went back home to Aston and became a carpenter.

So here's a piece of history... the young Spencer Davis Group looking very chipper and cheerful, on the central divider of Smallbrook Queensway.


And the magazine they're holding, Midlands Beat. I used to take photographs for it. And write a news column, for twelve pounds a month. Look at the cars – very vintage. And look how few of them there are in the picture.

You sat them in the middle of Smallbrook Queensway for a photoshoot?


We weren't exactly taking a risk, were we? Look at the traffic - it was a bit different. Steve (Winwood) was sixteen, I think.

So that's the local boys. Of the rest – shots of Mick Jagger, Nina Simone, Little Richard – what are you proudest of? 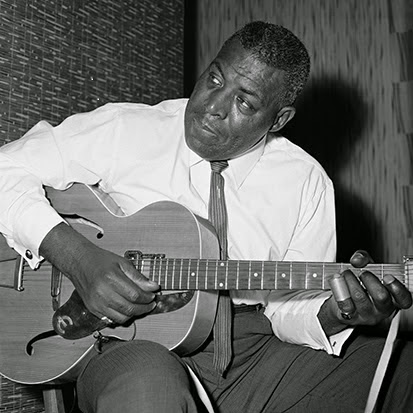 He was a very interesting man. On stage, he could rock a room into bad health without any effort, At the same time, he scared audiences. He was a terrifying presence. Six foot four, 350 pounds. But talk to him, and he was so gentle and mild. He told me a lot about himself and his life. He told me he couldn't read and write until his forties. The he went back to school and college. He was also very proud to tell me that when he first went to Chicago, he was recording – I think – for Sam Phillips in Memphis. Chess called him and he went up, but as he said, all the old blues guys went up to Chicago with the insides of their pockets hanging out. He went up in his own car, with 4000 bucks. In those days, a massive sum.

Jim, these shots from your twin lens reflex have come up beautifully. Have you had to do any kind of retouching work?


Very little. We tried in most cases to print from the negative. There's a couple we've had to adjust slightly. No much burning in or dodging. I'm digitised now, and I don't really like it. I love the flexibility - 20 or 25 shots without even thinking about it. In those days, with 12 shots a roll, and the fuss of changing the rolls over, you made sure each negative counted.