Dan Whitehouse and Chris Tye: they've got shows for you. And a Christmas song. No, really. 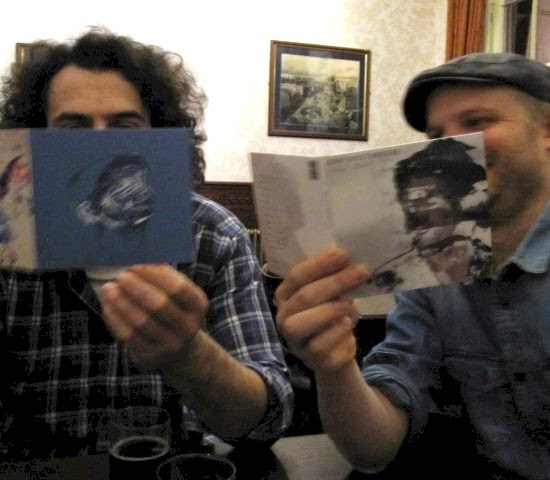 Dan Whitehouse and Chris Tye are comfortably ensconced upstairs at the Wellington in Birmingham City Centre. Two extraordinary singer-songwriters, each with a new album, each with full band showcase gigs in the next few weeks at the same venue – the Glee Club; both albums share some personnel : Michael Clarke has several cowriting credits with both Dan and Chris; Simon Smith crops up on bass on both albums. In some quarters, that might lead to flouncing, flared nostrils and rivalry. Not with these boys. Why, they've even written a Christmas song together. Read on for an exclusive listen.

Dan's new album, his third long player, 'Raw State' is largely a revisiting of some of his long-standing songs, sometimes after years of live performances; the core of the material was recorded live with a full band at Reservoir Studios in North London production chores were handled by Danny George Wilson and Chris Clarke from 'Danny and The Champions Of The World'. Chris' album 'Paper Grenade' was recorded this year, and produced by Michael Clarke in Kings Heath in Birmingham.

With the launch of albums and headline tours, talk turns to progression and development.


Chris: Yeah, but it can be difficult to fish out the gigs where it doesn't cost you money. Saying that, to fund 'Paper Grenade', I did a Pledge campaign; which I was really sceptical about doing. It worked really well, and in the end it gave me the opportunity to work with Michael (Clarke), and to get it mastered properly..

So what that really means is a vote of confidence, surely – you've got enough people to put the money up for you to deliver a work the way you wanted to?

I wonder whether Pledge and all the others have still got the same impact. There's been a lot of appeals, not all of them successful.


Chris: Seems like an honest way of doing it.


Dan: It's a big band. I've got BJ Cole on Pedal Steel, Paul (?) on lead guitar; the drummer from Danny and the Champions of the world.... I've thrown everything I have at it. Rehearsing tomorrow.

Chris: So are we. Same bass player, Simon Smith.

Dan: Simon is the glue that holds everything together.

So – shared bass player, shared producer. Tell me about your shared song?


Dan: Ah! A Christmas song, called....'This Christmas'. We wrote it in April.


Chris: We nearly did it a couple of years ago. A little trust exercise. One mix session away from finishing it - there's another mix session next Sunday. We sent each other four really primitive ideas. I didn't really know Dan at the time. He didn't send me any abuse.

Will you wind up on each other's stages, performing the song?


Chris: Is the 23rd of November too early?

No... by the time of your shows, you'll be wall to wall with Christmas.

Well, how about collaboration and ideas? You exchanged...


Dan: … bits of songs. Sketchy ideas. You know what it's like, trying to get together. We've made it work with this song. And one other one that's quite close.

Chris: I enjoy co-writing with the right people. It either works or it doesn't. You know within twenty minutes.

When ideas come up – Dan, you run Songwriters Circles, so you get ideas coming at you all the time – how do you step away from that and move into a collaborative framework? Can you move from teacher and enabler to collaborator?


Dan: I don't see myself as teacher in that environment, I've co-written a number of songs with members of the circle. I do my best... to apply the oil to the creative wheel, keep things spinning around all the time.

OK – here's a question for you both. Which was the most difficult song to do?


Dan: 'Somebody Loves You' is a big song in my set. And it's a song that I've struggled to get a recording that I'm happy with. Because it's so much about the performance, rather than the components of it. You couldn't do Somebody Loves You to a click track.

Your first recording of that song placed your voice in the world, with the noise of the world all around you. And you slowly trace how the song's character recovers from a point of complete desolation. I loved that – you in a soundscape, climbing up and out..


Dan: We recorded that in a school playground. And when I did that recording, Robin, it was before I had four years of playing that song live, every night, in a number of different environments. I had some really emotional experiences playing this song. But I struggled for ages to be able to get into to the right environment to make a good studio recording of it. That was my mission – to get a complete recording of that song – that was partly the reason to make this record. It reflects my knowledge of the song. I learned about the song through playing it. It's a two-way song – I'm not sure the song works on record. It's a conversation.

And Chris – what's your hardest song?


Chris: I suppose 'Vicious Words'. I played it live for about a year. It became one of those songs – unexpectedly. It's a song about divorce, a little bit downbeat. Bit I can really get into it live. I feel like it connects. It's a good song, I'm able to communicate it to people.

I played it to Ben Niblett, a producer who worked on about three songs on this album. He set up a mic – 'Gotta get a recording of this' – about three feet away. No spot mic on my voice and the guitar. I played it and we got it, one take. I know everybody says 'One Take', and it's usually comp'd.

Note: For a definition of comping, see here. In effect, it's anything but one take.


Chris: I loved this take. The first reverb we put on sounded ace. Do we change anything? We then did about six versions to try to recreate the magic. It didn't work, it almost never does when you do that. But I just thought the song could take a different treatment – electric guitar, double bass - so that's why there are the two versions.

I think the acoustic cut hits harder. It's a tough listen.


Chris: A lot of people said that!

Note: Chris and Dan are very interested in hearing from video producers with a view to getting something up for a December release - please get in touch with Dan at dan@dan-whitehouse.com. All proceeds go to charity, here.