I'm not a Facebook fan anymore. But I still check it daily. Others? Some NEED it. Still others USE it - really, really, use it. 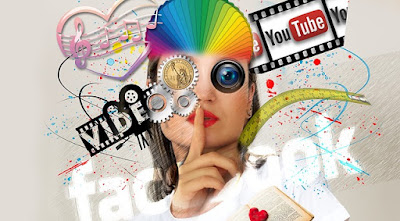 I read of milestones and music gigs. I'm in groups for old railways, radio stuff, local history, like that. I'm a nerd, and I don't care.

I use it to announce my milestones, or to plug blog posts like this. If I score a reaction, I get that buzz. Facebook trades on people's neediness; I'm no different. Call me a hypocrite. I still don't care.

Parish-pump Facebook stuff works. But as people shift elsewhere to talk to their pals, Facebook is increasingly about reaching potential punters and markets. Put brutally, we're product. That in itself is interesting.

If you tap into groups that share your values, you've got a way to get your messages out. Facebook doesn't make it easy. They see bands and musos as businesses, so you pay up. But I would swerve their entry level boost thing. I don't think sponsored posts are useful or cost-effective: those repeats get oppressive, so I kill them. That's the polar opposite of the original intent.

But there are people who take the business of seriously targeting communities much more systematically. I know of three or so; there are certainly more.

Steve Manley runs an operation called Parallel Tribes. It's aptly named. He's open about his methods, possibly because he has a solid marketing background, which puts him a step ahead of the pack.

Steve: “The Parallel Tribes concept is to help bands, young or established, to build audiences for their music. A lot of people don't concentrate on their audiences. Everybody has fans, but we believe that a lot of people gather fans on Facebook that they can't really reach. They don't own the data; Facebook does. It's the same at YouTube.”

I see people pleading for more followers. They want to hit those three, five or ten thousand numbers. Sometimes that's embarassing. But that doesn't mean those followers are actually that interested – they may just be making nice.

Steve: “It doesn't. Social media tribes can behave like sheep! If they see a pal of their following something, they'll also follow it – not because they like it, but because they think it's the right thing to do.”

You're tapping that Facebook neediness syndrome, Steve! So what's your approach?


“We want to hit audiences that like, and want to hear more of, a particular genre or niche of music.”

OK. So how do you access the audiences you think you're going to need?

“The information is already there. I'm going to mention Facebook advertising – and that's already a turn-off for many many musicians. They've all tried it, everybody's tried to boost a post. Unfortunately, it doesn't work.”

“Facebook post boosting is generally too broad. When you boost a post, even to your followers, you're not correctly targeting the audience you really need. Facebook knows lots about everybody who's on there. You have to pay to get that information.

"Done the right way, it's money well spent. We've trialled this very successfully with a local band, Devilfire. We've had some very strong video viewing numbers. Facebook can tell us the people who have watched at least fifty percent of the video. If they've gone that far, you can pretty much assume they like that video.”

“YouTube has always been the video leader. YouTube give you something called Insights. But you can't target the audience it shows you, except through Google Ads. Google and YouTube don't have as much detail as Facebook.”

Odd! Google is huge (its market cap is nearly twice Facebook's). They know all about us – what we log in to, where we go, even what we buy. They have all that data, which they happily monetise. But that's not available to you?

“Facebook is much more targeted, at the moment. Google ads work for certain projects, certainly. But to target groups is much more difficult.”

Let's get back to Devilfire. Take me through what you did.


“We targeted sound-alike bands. Devilfire are part of a new wave of British Rock. They sound very similar to some of the bands that emerged in the eighties – the New Wave of British Heavy Metal. Take Thunder, a band that had quite a following. We targeted Thunder on Facebook. Anything, any post, any comment that links back to Thunder lets Facebook tag that person. So we were able to go in and pull out the fans that liked Thunder, and advertise directly to them, with Devilfire's new video release.”

Would Thunder or their management company be happy with what you're doing? You're piggybacking on their work, are you not?

“We're piggybacking on the popularity of Thunder, not necessarily on their work. But we also did it with a much broader range of bands - Whitesnake, Aerosmith and Bon Jovi – which allowed us as advertisers to trial five, ten, fifteen adverts with different bands. Facebook works out the relevance of an advert; you find out how well your advert did. If it was only a partial success, you still have access to the people who did react well."

So you have a receptive potential audience.

“Exactly. And we can offer the next Devilfire EP to those people, who we know are receptive, for free, in return for their email address. Which is much more efficient than Sound Cloud or Spotify or Google, where you have to struggle to get noticed. And we're then going to offer that list a track a day, details about the track, the lyrics, a high quality stream or a downloadable mp3.”


“Once the campaign has run, we'll know who has stayed, or who has unsubscribed. At that point we move into things like vinyl and other product.”

So the band's done the music; you've done the research; now for the marketing. Two questions. Firstly: you are relying on Facebook's current algorithms. At some point Facebook will either pick up on what you are doing and tweak the algorithm... and start charging a lot more money.

Second question. You've stepped off the everyday huge level playing everyone's on, and you've given yourself a much more effective platform. When other people spot what you're doing, isn't that are going to become a little bit more crowded?


“Other people coming in? I say go for it. Our mission is to build audiences for bands. If other people learn from this - we're going to be giving away some of the crown jewels on a Facebook group - and they don't want to work with us, fine. We take bands that are willing to work with us. At the end of it, they have a fan base they can use. But that fan base stays with us. We then know where specific fans are. And on it goes.”


Cute thinking. I'm sure it comes at a certain cost - this is a service. I also think it this may well work better for some music genres - Metal and Hard Rock listeners are loyal, so this approach taps into that. I'm not so confident for other areas. But I'm pretty sure it's going to work - for now. How long will it work? I can't tell. I'm going to revisit this with Steve in a year's time. If you're interested, there are links at the bottom of this post.

Please give me feedback! I would absolutely love to know how it works out for you, were you to dive in with Steve's operation.

There's a whole other post to bring you about another Social Media impact: on today's radio DJs and presenters. Things are so different from even ten years ago, let alone the last century. And not in a good way. Strikes me that Facebook-conditioned neediness and reactive self-serving is front and central; communication and the sharing of ideas is on the back foot. I'm going to dig into this in a few weeks.

My Mailing List is the best way to follow topics on this blog. You get a short email on Mondays (usually) for each new post, with the big recent topics, and once in a blue moon, an offer or an exclusive freebie. I won't pass your address on, promise.