BRMB: 45 years ago today, a station came out to play

Sedate? Pah. I was expecting big fun, tidal waves of emotion and mawkish sentiment. Why? Well some of us old originals at BRMB Radio threw a bash last Friday for staff members, to mark the 45th anniversary of the launch date, February 19th 1974. That's today. And the day after Friday's bash...I felt distinctly fragile.

I'm one of the BRMB originals. They'd hired me the previous November, along with the great John Howard; we were the first jocks on board. John left, quite early, to make his way to Radio 4. I stuck around for twenty years, ten on them on air as, mainly, a rock jock. 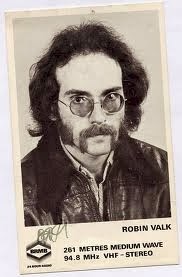 We were young and lovely, naïve, idealistic, obnoxious, insecure, and full of spit and vinegar. Now, we're older and some of us are wiser. Times have changed in ways none of us could have imagined. But I'm enormously fond of what BRMB achieved, in spite of itself, back in the day.

The truth? Honestly? We were often a bit rubbish. A ramshackle bunch of wildly different individuals who shambled into what, at times, was a pretty decent stab at local radio. I'm very proud to have been part of that.

On that February 1974 launch day, I was on air from half past seven at night, with two 90 minute sequences separated by a half hour 9 pm news bulletin. Imagine that. Half an hour of live and local news, at 9pm.

Three months of prep work had not managed to answer all of my questions, or settle any nerves. I woke up horribly early, and started listening. I'm not sure I would recommend this – first days can be weighted down with pompous management speak and airy promises.

BRMB was no exception. It's interesting to compare the BRMB launch with that of its sister station XTRA AM, fifteen years later, on which I also worked. That outfit sashayed on air like it had always been there, always part of our lives.

Late morning on launch day, I went in. I got off the train at Aston and walked up the hill to the studios. The original BRMB was located in an office building, once ATV's offices at Aston Cross, hard by the Expressway. The Aston Road was lined on both sides with small 19th century terraced houses. Many are now gone, replaced by industrial units and road widening schemes. At the top of the hill, Thompsons the Pork Butchers had their main operation: a shop and a slaughterhouse. If you walked past at the right time, you'd see truckloads of live piggies being unloaded, to reappear as black pudding, bacon, sausage, pork pies and joints of ham. Beyond Thompsons, just before the studios, there was Ansells Brewery and the HP Sauce factory. Aston used to smell: pungent, fetid and vinegary.

In the station, it was... well... it was launch day. I've done enough station launches to recognise the symptoms now. But this was my first. It was all new. There were presenters coming off the air absolutely wiped out from their first shifts, engineers hovering, twitchy sales staff checking their ads were played out right (sometimes they weren't; sssh, don't tell anyone). Management strutting with fixed grins. Oh, and bloody hell, the great and the good... the place was awash with councillors, board members and dignitaries.

Of course, management laid on a spread. Of course, all of it was gone by the time I got there. Pah.


I really don't remember the afternoon. I was a bag of nerves, of course, picking and re-picking records for the first show, fretting over running orders. Eventually I went upstairs with my pile of vinyl. At 7.30, I went to air. I have absolutely no recollection of what I played. It was 1974, so there would have been a lot of what's now Classic Rock: bands yet to break in the UK – Little Feat, Doobies, Eagles – and vintage local stuff like Traffic and Zeppelin. Oh, and late period Beatles, maybe some Stones or Bad Company, Vinegar Joe, Sutherland Brothers and Quiver. And other names that have now completely faded away.

Nine o'clock rolled around and I got up from my chair. To my astonishment, it hurt. I actually creaked, I was so tensed up.

Nine-thirty and I was back on air, ready to for my first live BRMB interview: Jeff Lynne and Bev Bevan of ELO. BIG local stars, paying a real compliment to the new baby station. The place was deserted by then. Just me, the late show guy, the newsman, and, downstairs, the security man - who couldn't let my guests in because something was wrong with the stairs. I leaned out the window, shouted down to Jeff and Bev to wait while I came down, and let them in through the half-built, unlit, emergency exit. Ah, the class, the glamour....

Ten-forty, interview graciously concluded, thank you Bev, thank you Jeff. I coasted through the last minutes of the show, and handed over to Lates. I took my stuff down to the library, got my coat, and stepped out in time to catch the last Midland Red 110 bus.

Yup, the bus. I was on forty quid a week; fifteen of that went in rent; no way could I afford a car. I got home and slept like a log.

I - we - had no real idea of our audiences; that came later. I was feeling my way; we all were. As my previous station had been a 24/7 USA rocker, I had a reasonably good idea of what I needed to play, learned at a place where everybody was on the same page. But BRMB had so many pages for DJs to be on, it was like a book. Along with the big mainstream personalities - Ed Doolan, Les Ross, Nicky Steele - we had specialists – soul, jazz, folk, classical, country, Asian - none of whom overlapped with each other. And that was before you got to the Sports names like Tony Butler. All the specialist DJs had clear ideas on what they needed to play. Some were right...

And on it went. I was on air five nights a week, three or four hours a night, for years and years, with the freedom to pick and choose, and funds to go find the best local bands to record. It was a fantastic platform. I was very, very lucky to have it.

That was forty five years ago. There is a huge and unbridgeable gap between how it was and how it is. Some things are the same, though: the pay wasn't great then, and I doubt it's any better now.

And it could be that the great radio days are over, although I don't think so. Music radio evolves to meet generational demands, helped by new technology. The generations aren't as clear-cut now. And while hot new technology has smoothed working practises at radio, it has also largely removed one of the most vital planks of old-school radio: its ability to bring new stuff, first, to hungry audiences. We have a lot more stations, but I don't feel we have more choice; quite the opposite.

But for all the formats, for all the professionalism, for all the slick technology – which, by the way, I absolutely love - for all the centralisation, for all the risk-averse programming, I still get the same old vibe I got back in the day, whenever I walk into a station, big or small, local or network. It's still radio, and I still love it to pieces.

I think radio still has stories to tell. The new story-telling, using 21st century technology, will start in the margins, as new developments always do: on the web, on your phone, on new platforms we don't even know about.

My thanks, as always, go to the great people at BRMB and elsewhere who steered me in my early days. My best wishes go to the coming generations of radio practitioners - including at Scala Radio where I am currently gainfully employed.

Wonderful blog - I was born in 76 so grew up with BRMB, my dad Chang used be a guest on Tony Butler's show as he was a biker doing various stuff, I remember waiting outside the building in Aston. Great local radio, with proper news and the Walkathon. Such a shame what has happened to local radio, times change I agree but still sad none the same.

Wow,pictures paint in the mind reading Robin's blog and I can still smell the HP. When I joined BRMB and RV walked into the presenters office I nearly bowed! It was a pleasure to work with people who were essentially the radio stars of their time in Birmingham and beyond. I was the new boy in the team but Les showed me around the City,Ed took me shopping, Robin imparted wise advice and Tony Butler was er Tony and funny with it.John Russel was godlike and Paul Brown was imposing and a lovely man all rolled into one with a pipe. The time I had at BRMB was the shortest stay of all the stations I worked on but still rates as very memorable.Happy 40th

I was a keen BRMB listener in the early days. Got up early (age 14) to hear the start of transmissions at 6am on the first day (a Tuesday from memory!). Kevin Morrison of ATV continuity was the first presenter followed by Savin and Scott (Brian Savin - who still broadcasts on GEM). We had my pocket radio in the school playground! The broadcasts sound tame these days but were revolutionary to those of us who's experience of local radio had only been BBC Radio Birmingham up until then! They even used to announce which midland towns had half-day closing and where it was market day! It was all live, never syndicated from elsewhere and was a real mix of music, news, current affairs phone-ins (it was a general election campaign and the three-day week), rock and even classical! Folk would laugh at the jingles these days, but they still play in my head ("stay here with us - it's the sound way to spent your day! Doobie-doobie-doobie-do")

It has been awesome to read this post from somebody who was actually there at the time. BRMB and Les Ross are the reasons why I wanted to be involved with radio from a very young age and to read of the launch day from one of the original people there at the time is awesome. I would go past that building so many times before it moved to Broad Street and wonder what sorts of exciting things were going on inside. Would have given anything for a glimpse. Thanks for making this epic post.

Great Stuff! I listened to BRMB for many years, from when it launched, fabulous radio! I'd love to have a list of all the acts that appeared in the Lark In The Park of 1977 & 1978, which I attended. I can remember some of the bands & have a few photos somewhere but they were taken on an old Kodak camera & are quite far away. There was Rainmaker, Little Acre, Slender Loris, City Boy, Ruby Turner, Fashion & many more but I can't recall them all & which year. It was so exciting being there & a brilliant look at some of Birmingham's rich musical talent..very happy days! And Thank you Robin!

Well, thank you so much for your kind words, Debbie! I think - it was a long time ago, that we had Little Acre, Slender Loris, Hooker and Rainmaker in 1977. In 1979, Steve Gibbons, Ruby Turner, DeStijl and School Sports. I don't think City Boy were there - they played a gig with Raymond Froggatt at the Rep for BRMB. And Fashion? No, they never played open-air daylight gigs. They did other stuff for us. Happy days indeed!