Friendly Company! The Stuffies are coming to yours

Like a thousand other towns across the country, developers and lousy town planning have ripped the guts out of Stourbridge. The town is a tangle of road improvements and pompous corporate new-build. It's totally out of step with the charming, human scale of the unprofitable parts left behind.


I head along old streets of small terraced houses, down a clearly ancient pathway behind a church. I fetch up in a quiet neighbourhood boozer, one of several I'd passed. No piped music, no fruit machines, no Sky Sports; instead, a large affable dog and some excellent ale.

And Miles Hunt of The Wonder Stuff.

Must be something in the water 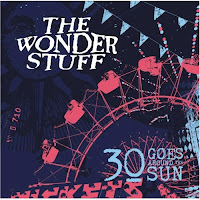 This bit of the West Midlands punches way above its weight in witty bands with a nose for a tune and a good time. Hunt and pals recorded and rehearsed back in Stourbridge where they first got started. That's despite making a three hour round trip to get to work.

Miles is, as usual, on top form. The new album comes out almost immediately, making a very particular milestone: It's called Thirty Goes Around the Sun.

Few bands last that long, and to be precise, The Wonder Stuff didn't either. Miles worked on his own for a spell, mainly in the U.S.

Over thirty years, there's been an awful lot of line-up changes. There are those who say it's simply Miles and his mates. That may be true, but I suspect Stuffies fans don't really care. Any band with that lifespan is bound to change personnel. And almost every band that stays that course does it because one or two key members holding the core focus.


Miles I have to have eight straight hours of kip. I used to stay up too long on tour buses, having fun. I still do! But now it doesn't matter whether I go to bed at nine o'clock in the morning after a belly-full of whisky - as long as I can get my eight hours.

Can you still hit the high notes?

You know what? We've not had to change the key of any song. I wasn't a very good singer when I started – I'm not saying I am now - but I pretty much did everything wrong, physically, so I had a trashed throat.  Somewhere in the mid-nineties, I learned to sing from a different part of my throat that the part I speak with. If I'm stood in front of a microphone, there it all is. I can go to a soundcheck with no voice, croaking, but once I smell the dry ice and see the lights, it just comes back. It wasn't planned - just a happy accident!

It's perfectly obvious that you love, you absolutely adore, the whole live thing

That's why I'm in a band. I could sit and muck around in studios forever, but it wouldn't bring me the pleasure of playing live.

Whose songs are they, anyway?


With an established band comes expectation. The songs go out from performer to audience, and they acquire their own separate meaning. Decades ago, I watched Springsteen kick off the intro to Thunder Road, and then stand back, with a mile-wide grin, as the entire NEC sang the first verse back to him. It was gorgeous. I love to see the relationship and love that flows back and forth between performer and audience, carried by the song.

Miles When we play live, we try to play the songs as the audience think they know them from the records. There's a reason for that. I discovered some years ago that all those songs don't belong to me any more. They belong to the audience, as the soundtrack to their lives. So our job, as the custodians of these songs, it to perform those songs as the audience expects. I've seen David Bowie do a horrible reggae version of The Man Who Saved The World. I'd never do it.


The Stuffies are embarking on a ridiculously long world wide tour. For such a quintessentially English band, they have a large global following. So there's a certain focus on pacing - and self-preservation.

We play pretty quiet these days in rehearsals. I used to want it all full blast; now I don't. I wear ear-plugs for rehearsals now, stick a bit of rubber in. I mean to do it at the gigs, but if I do that I miss a lot of the heckling. I like to hear the heckling! There's humour that comes with The Wonder Stuff, and I like to respond to that. And we're a very loud band on stage. I have kick drums and snare drums and bass coming out of the monitors in front of me, and I feel that in my gut.


Thirty years of noisy rock can take its toll. There's plenty of deaf old rockers out there.

I went to the doctors the other week to get an ear test, and I've taken no damage. I really thought I had, and it was just a load of wax in my ear!

Sex And Drugs and Rock And Roll, Miles?

More seriously, a lot of the previous generation to you have started to keel over, which is very sad. Have you maybe stored up a bit of Rock and Roll craziness that might come back to trouble you in later life?

Not really, no. I'm a bit of an ardent boozer. But I'm a bit like the Dean Martin of the indie rock world, in that I can play a drunk when I'm not actually drunk. Class A drugs and that stuff? Never really been interested. I was quickly thrown into a world in 1989, meeting guys in bands that were a lot bigger than us, selling a lot more records that us, touring the world, and doing a lot of drugs... and I just found them to be utterly boring. I can talk enough rubbish without sticking anything up my nose. And people I'm friends with who are still playing after all these years – they're not interested any more either.

Album
The crowd-funded album 30 Goes Around The Sun is released this week.

Put your email address in the box below, and you're all set.
Posted by Radio To Go at 09:14

Bostin interview...can't believe it's 30 years since I saw the boys at the cod club Birmingham...