Elephants? Pah. There's a digital dinosaur in the room. 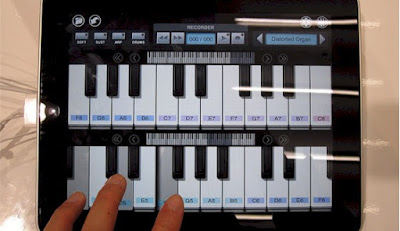 I was at the BBC Mailbox offices in Birmingham last week. They've redone the entrance. You can now check out hot BBC WM studio action as you walk up to the reception desk. This is a good thing. I always like to see real live radio, made in Birmingham.

The sad coffee outlet and gift shop have gone. Ironically, there's now a life-size Peaky Blinders backdrop. You can take selfies! With Cillian Murphy and his gang! Well, it's nice to see Peaky Blinders stuff in Brum - that's a first too.

Next to it is an area showcasing new digital developments. It's manned by pleasant guides who walk you though the new toys. I had a play while I waited. And then I asked questions. Well, I do that.

It's fascinating. Slap a 3D headset onto your skull, and here's David Attenborough cuddling up in 3d to a realistic cgi dinosaur. There's the Strictly dancefloor, with flying sequins, orange faces and fixed grins all around you.

This immersive stuff is available on flatscreen, but they've reworked it for 3D headsets. You select options with a trackpad somewhere around your temple. It's very jolly. In fact, such brand extension could be big. If they could digitise smells, Bake-Off would be unstoppable.

It's another good thing. If the BBC has a hot new format or a big new show, they can cook up 3D versions for extra revenue along with the videos and computer games. So - good in terms of generating funds for the corporation, as a hostile government finds fresh ways to hobble income and, as a consequence, innovation and creativity.


I had a few quibbles, and I wondered about voicing them. Last week wasn't the best for the BBC, again. There's enough people putting the boot in already. But given the consistent lurid flood of past misdeeds, it's not a good time to be picky. So I might as well carry on.

Notwithstanding sordid presenter ghastliness and ostrich management, I still have all the time in the world for the BBC. And I am have geeky fascination for new toys and digital delights. So I fired tech questions at my affable guide.

The first thing that struck me, as I pulled off my sweaty headset, was that I had been totally isolated while watching David's dinosaur caper. It was just me, passive, fed something completely pre-programmed. Sure, the content was entertaining. It even had a bit of interactivity if I moved my head a bit. But essentially, this was predictably sparkly but bland gee-whiz stuff, built to be lapped up.


I'm not sure I'm comfortable with the thinking behind this. It's cute and clever, but it's ephemeral. It doesn't engage. Personally, I'm happiest when listening – or watching - something that engages me.

So: a fantastic DJ pitching music with enthusiasm? Great. Or a scorching live debate? Yes, please. How about an engaging articulate on-air presence? Superlative drama? Powerful stories told by compelling individuals? That's more like it.  A clever but knowingly pre-packaged synthetic piece of VR? Meh.

And, beautifully realised as it is, the concept's not original. Here's a clip of You Are There, a 50s children's US TV show, where a credible broadcaster of his day – Walter Cronkite - was relocated to a virtual point in the past.
This is a dated production, or course, but there is no conceptual difference between Walter with a news script and David capering joyfully with his virtualosaurus.

Actually, hold on - there is.

Shows like 'You Are There' came from when broadcasting was a communal activity. They sparked discussion and reaction. VR shows on headsets are designed for solitary audiences. An atomised audience, where the only reaction called for is passive consumption.

So I trotted this out to my guide, who, gamely stayed polite and smiling, to his great credit. We also talked about digital production tools, on which he was less sure. Then I asked about the BBC's team of Digital Guerillas, for two years ensconced somewhere in Digbeth, and who are even now, supposedly, dreaming up exciting new digital products. Sadly he wasn't able to shed any light.

It's an interesting state of affairs. The Beeb has been banging on about digital for ages: it will be a game-changer; BBC Birmingham will become a sparkling digital hub. I'd have loved to see some sort of evidence.


Tools for the digital coalface


The major digital impacts I see are the explosive impact of new editing and production tools. They make programme making easier and cheaper. Add to that thousands of new broadcast channels both inside and outside the BBC. Both of those are firmly on the unglamorous side of things, but they let bright ideas emerge and new voices be heard. Great stuff; but it's not sexy. It won't attract funds. It doesn't make headlines.

But for me, new digital picks and shovels built for toilers at the virtual coalface are much more exciting than watching David Attenborough stroking a non-existent dinosaur from inside a sweaty plastic helmet.

Bottom line:  digital kit is a tool, a means to make and deliver content. It's great for virtual armies on screen or convincing blood-spatter in gore-fest movies. It even allows stars of old to be recreated on stage, which is faintly creepy.

But it doesn't replace ideas and the need to create those ideas.


So – thanks for the chance to look at the new whizzy developments, Auntie. But I'm really not sure that sitting watching something happen in my solitary bubble is the way to go. That said, I'd love to know what other tools you've dreamed up to help your hard-pressed creative staff.