It's that time of year. The Folk Ensemble will run riot. All 50 of them. 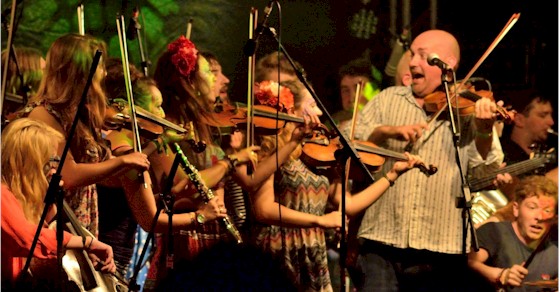 I'm sitting with a university lecturer in deepest Smethwick. If truth be be told, I'm not here for his academic chops. He's a muso, and a bloody brilliant one at that. We're at the bottom of his garden, drinking coffee. In a shed; brick-built, but still a shed. But instead of bamboo canes, rakes, spaces and shears cluttering the floor, you step around guitars and fiddles. There's posters and a couple of really tasty speakers hanging off the walls, hooked up to quite a large Mac.

You've guessed by now. This is actually a studio. It belongs to the Urban Folk Quartet's Joe Broughton. This is his workplace.


The posters are for UFQ's several tours. Oh, and a few solo and duo projects. And The Albion Band – Joe played with them too – and the Conservatoire Folk Ensemble. That's... these guys.
In a couple of weeks. There's going to be a bit of a folk riot at the Spotted Dog, a backstreet pub in Digbeth, Birmingham. If you've never been, and especially if you like your music live, you should visit. John Tighe, who runs it, pointedly supports local music of all stripes, often giving the venue over to new talent from Birmingham Conservatoire – the school of music – and this is where Joe will bring this year's iteration of the Folk Ensemble for an all-day music orgy.


Joe: In Birmingham, I've tended to hand over the local gig to students to run as they see fit, because we've got so many friends and contacts. So for years we were at the Cross (now the Dark Horse) in Moseley, all sorts of different venues. But the last few years, with the support of the management at the Spotted Dog that's where we've been. It's the third year of something called Power Folk. A few different bands, all related to the ensemble, and we make a day of it.

The Folk ensemble has spun out a terrific number of amazing musos. And looks like Joe's had quite a hand in all that. Here's a partial list


Erica Knockalls (solo and The Wonder Stuff)
Louis Robinson
Frank Moon
Ruth Angell (Peacock Angell, the Froe, Ashley Hutchings)
Jo Hamilton
Robin Beatty and in fact most of The Fair Rain/Old Dance School
Laura Mvula
Fred Baker
Most of The Bonfire Radicals
Most of The Destroyers
Lydia Glanville and Hannah Fathers of Boat To Row
Tom Chapman of the TG Collective and UFQ

and there's an awful lot more, including a bewildering array of stellar percussionists...  And while I'm at this point in the post, let me issue an appeal.

If you were a member of the Folk Ensemble at any point in its existence, and have since gone on to play a part in Birmingham's music scene, or beyond, please do let me know - there's an email tool at the top of the page - and I'll try to add you the list.

It's unusual, and quite admirable, to see a higher education institution go out of its way to support this kind of work. And the Conservatoire has been unusually supportive.


Joe: I was there as a student, and joined the staff the same year I left as a student, in '97. This was down to the fantastic Andrew Downes. I wrote to a number of places – I was a 17 year old folk fiddler who was into rock and such and I'd been playing folk festivals since I was 14. So I talked about the things I did, and Andrew Downes called me up – the direct approach – and invited me to come and have a chat.

When I arrived they had Gospel, Gamelan, Jazz and all sorts of other things. Now there's a lot of enthusiasm for a lot of music. My part is very small. In the Folk Ensemble, a lot of people have come in and out of there over twenty years. Students come and go, as is their nature. There were quite a few of us who didn't fit into any conventional mode.

When they asked me to lead Folk I jumped at it. In the first year, we had seven students, in the second fourteen, and so on. Now we've got a huge number - technology students, an accordion player - all from different courses.

So when did the Folk Ensemble turn into a touring beast, rather than a nice bunch who only gave concerts in Brum?


Joe: After a few years, I thought it just wasn't enough to give a show at the Adrian Boult Hall. We needed to get out to live gigs, raucous folk festivals, where people aren't afraid to throw things at you if you get boring. All that's really important. You need to be able to deal with a heckler, or to busk in the street and deal with drunks and people walking off if they don't like you. Or worse!

The performer, the audience and the dialogue between the two.


Joe: Exactly. So we did a couple of gigs outside the college, and one thing led to another. More people watched, and more people joined. At its biggest, we had 83 members in the band, and it got a little bit out of hand. We had to take two coaches to the gig. So I had to encourage some people to leave the nest. People had been there for six years or more. And the point of it is to encourage a turnover.

That's tricky, though, if someone's been playing their heart out for you for six years...


It's at the point when I stop saying they should stay, and say, 'OK, fair enough, if you want to leave...'