Whittingdale's little list: The White Paper and the BBC


Clowns to the left of them. Jokers to the right...

I've got two pages open on my screen as I write this. Both make my blood boil. The first is yet another anti-BBC piece from Rupert Murdoch's Times, where Culture Secretary John Whittingdale is reported to have joked to a bunch of Tory Students that the end of the BBC might be 'a tempting prospect'. The article goes on to list Gary Lineker as the first to spring to the Beeb's defence. Go Gary, I say; power to you in your underpants.

Item number two is just as jarring: a strident attack on the BBC from new boys Evolve Politics, who emerged after the Labour Leadership election, along with The Canary and Momentum. They're all over my Facebook feed. Depending on your politics and/or your Facebook 'friends', they may well be all over your Facebook too. That's the creepy way the thing works. Ironically, it's great for marketing...

Evolve Politics and pals are solidly, uncritically, behind Jeremy Corbyn; Jezza can do no wrong, ever ever ever. Evolve are never less than outraged. Here, they slam the BBC for being disgusting Tory stooges.

Poor old Beeb, eh? Attacked on all sides, while the troops on the ground have to soldier on. It's reminding me of Tennyson's poem...


It must be tough. Gallons of bile are being spat at the Beeb from all sides, and, frankly, they're not exactly defending themselves that well. When they do, they're accused of being too political, so they can't win. Nobody's perfect, and the BBC certainly isn't. But it's under serious threat. We will miss it sorely if we stand by and let it go.

There's a relentless torrent of anti-BBC bias, powered by organisations that want to see the BBC hobbled, either for commercial reasons or for ideological control. Axes are being ostentatiously sharpened. It's nauseating, and I sympathise enormously with BBC staff and management. Well, I sympathise mainly with BBC staff who have to do more and more with less and less.

In the past two weeks, the Guardian has run pro-BBC pieces from across the political spectrum. There's Polly Toynbee (pretty hard left), Phil Harding (an ex-BBC lifer, sitting in the centre and in my view scrupulously fair in his analysis) and even Norman Fowler, of Margaret Thatcher's cabinet resignation fame. All three argue against taking the BBC's independence away.

Harding makes the very valid point that the BBC is not a state mouthpiece. That is its strength, and should remain so.


The Politicals: the Government, and Momentum

It's hard not to see the Government position as being driven by malice, pure and simple. Think Cat And Mouse: it's never pretty; sometimes it's sadistic. But the government of the day has always tried to exert influence. Harold Wilson was convinced the BBC was out to get him. Maybe they were – that's partly the role of an independent news operation in calling people to question.

But the Beeb is being shot at by both sides. Evolve Politics keep banging on about a massive Tory cabal/conspiracy at the BBC. I'm really not sure about that, and nor is anyone I talk to in the BBC. But please don't deluge me with outraged email, guys: I see plenty of your stuff on my Facebook feed already.


Ever since I can remember, BBC presenters and commentators have pointedly shredded politicos without fear or favour. That's the job: hold the people who run our country to account, in public, on our behalf.  Politicians hate this; I love it. That's always made the government of the day want to rein in the BBC. Of course it would be great if the government of the day - especially the current one - actually took on board how the country feels, but I'm not holding my breath.

The Today Programme on Radio 4 is never better than when there is a no holds barred commentator - politico scrap. It is compelling listening. Remember how Tony Blair made a point of swerving the Today programme as often as he could? Cameron's appearances, too, are as rare as hen's teeth. Note, too, that star Beeb's commentators, Jeremy Paxman and John Humphreys, are not remotely left-leaning. They just did, and do, their journalistic jobs.


So it's looking like the smug vindictiveness that Whittingdale showed in private last week might have backfired. He's had a bad few weeks, after all; this is just one more gaffe. The real focus is on a wildly dubious argument. The forthcoming White Paper will go strong on 'competition'. The BBC is exploiting an unfair position, and the commercial boys are suffering, the poor lambs.

The radio facts are these: the most recent RAJAR survey has the BBC with 53.5% of radio listening against Commercial Radio's 44.1%. That's a pretty good indicator of performance and listener preferences.

But the government now says this isn't fair on the commercial boys, and the nasty BBC is simply not, er, 'distinctive' enough. So maybe the best BBC stuff ought to be hived off and given to the commercial sector.

Well, hang on one second. Isn't competition what the commercial sector is all about?


Competition is good, my Tory pals keep telling me.


By that logic, hobbling anyone is, frankly, stupid. Look at the history of popular radio in this country: competition has always been the driving force, no matter how much the government of the day tried to skew the playing field.

And competition has been very good for the BBC, shaking them up on a regular basis - which is no bad thing.  In the 60s, pirate radio hit the Beeb hard. Result? Radios 1 and 2. 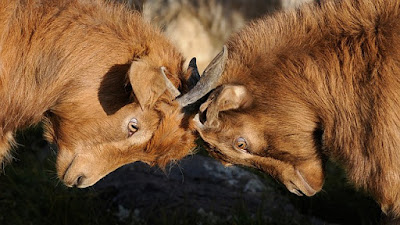 In the 70s, ILR (local commercial radio) did much the same thing to BBC Local Radio. The result was that outfits like WM, and others, morphed into influential local powerhouses of their day, sometimes hiring big personality presenters away from the independent sector.

1Xtra was a direct response to the explosion of Grime and Hip-Hop and the pirate stations that carried that music.

Of course, 1Xtra apart, this is all history, the radio of the last century. Now we have hundreds of stations slicing the cake really thinly. Caution rules, as the commercial sector offers rigidly bland and predictable output, across nationally branded networks. But the BBC continues to smash the commercial radio sector by a considerable margin.

Whittingdale's position on 'distinctiveness' is patently absurd: it is only distinctive, adventurous programming that introduces new artists to the audience.  Sorry: you won't find that at Heart FM. They'll give you the favourites until the cows come home, which is fine if that's what you want. But someone has to help create those favourites. That's where risk-taking radio excels.


And if the commercial boys win?


If the White Paper leads to Whittingdale getting his way, it's pretty likely that Radio 1 and Radio 2 will go commercial. That's not good. Profit will drive programming. 6 music might just get rolled into another sort of Xfm/Radio X, just a lot more blokey. As for 1Xtra, there is a precedent, and it's not reassuring. The morphing of Kiss the pirate into Kiss FM the brand took it from exciting, disruptive and connected to super-bland.

There is another way, Mr Whittingdale. Back the hell off from relentless attacks on the BBC. Swallow your bilious resentment of one of the world's finest creative forces. I know that some of their management can seem infuriating, arrogant and insular, but that's just how it always is in a large and inevitably imperfect institution. Nobody's perfect – just look at your own party.


I don't recall anyone asking me about what I want from the Beeb. Funny, that.


Instead, here's a wild and wacky notion you may not have considered: listen to what the vast majority of the electorate is saying. A consultation exercise for your White Paper told you exactly that, but you didn't want to hear it. So you ignored it favour of focus groups heavily weighted with the BBC's commercial rivals.

Mr Whittingdale, the core Tory supporters that you really should not offend love the BBC as it is. So, frothing conspiracy theorists apart, does the rest of the population. They prove it every day. Leave the BBC free to serve its audiences in open competition. Leave the institution free to be independent for the greater good of all.

I'd also like to add a personal request while we're at it: look hard at radio, especially local radio, which is flexible and cheap as chips – no Peaky Blinders budgets here. Allow the funding you have so gleefully restricted to flow in a significant way into BBC Local Radio. This is where careers start and new ideas should be nurtured. Free those stations up so they can truly reflect the astonishing local culture of our cities and regions which you seem to care so little about.

Put your email address in the box below, and you're all set.
Posted by Radio To Go at 08:51