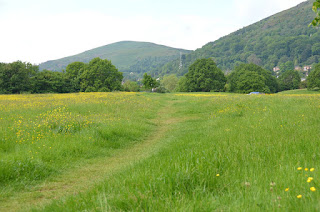 The plan was to do some recording: live, straight to stereo. With that we had a conversation for the blog. In due course, a lot more more material will emerge as a full-on radio show, part of a new series I'm working on. But readers of this blog are getting an early taste.

To start with, here's a song from the very end of the session - |'d asked them if they did anything with music and voice. And, glory be, they do...

This is extraordinarily relaxed. I've rarely been at a session where things have flowed so nicely. But then, you are both vastly experienced. You've worked together for some considerable time

How do you organise the professional stuff - gigs, booking, all that?

Vo: Word of mouth. You do one show, and somebody's there who runs another gig, and will we come and play for them? So that leads on to clubs and festivals. I have a trio, with Rick Sanders and Greg...

Catherine: … and every now and then they allow me to get up on stage with them.


Catherine Howe will be familiar to anyone who listened to pop radio in the 70s. She had one major hit, Harry. Here's a video of the song, caught live at Tom Martin's Tower Of Song. .
But once Harry scored big, things then seemed to run out of steam. Catherine wound up exhausted, her money spent, after her hapless record company tried all sorts of ways to market her as a pop chick. As happens so often, the record industry grabs at talent the moment it sees it, raw, finished or otherwise - but preferably raw so the talent does what it's told. Then the industry uses that talent the wrong way, and then, finally, the talent get the blame for not being successful.

In the early 70s, singer-songwriters like Catherine were hoovered up as companies tried to find the next Joni or, failing that, the next Carly. That marketing strategy generateed short-term sales, but it didn't build careers. Talents like Catherine became bargaining counters in internal boardroom battles, and this almost always leads to disappointment and worse. So after a few frustrating years, Catherine quit.

Catherine: I was broke. I did one or two jobs. I was hopeless. It was up in Yorkshire, where I come from, and the women there accepted me as me, which was a very nice experience. I remember once someone who came to the door, maybe it was with a delivery, asking me 'Wasn't there a singer Called Catherine Howe?' I denied it was me.

But you eventually changed your mind. To step back, to perform live again after an unsatisfactory experience, is never easy. What made you come back?


Catherine: The songs. I had songs, I wanted to record them. I wanted people to hear them. I did an Open University Degree course in the 90s, when I wasn't doing any music. That really changed my songwriting. It changed the subjects, and my approach. So eventually I came back into the studio. And I'm very glad I did.

Vo: We recorded an album at my studio in 2009. It was just us. One guitar, one voice. It was easy. We could do one song a day... or maybe three or four. We did it until we were happy with the performance. No pressure.

You are clearly telling stories these days.


Catherine: Yes. A lot of the songs tell stories. Mayfair Cot was inspired by a photo I saw of a little girl, sitting on her bed, a photo from the 1800s. And she's sitting there, someone's given her a bunch of flowers, and she's looking straight into the camera. The bed were sponsored. Each bed had the name of a sponsor above it. Above her bed is a sign saying Mayfair Cot. I was by the piano. I turned round and wrote the song. Straight away.


I'm interested in the process of creation. Your work, and what happens when you've done your song, and you've put it out there. It takes on a life of its own, it travels. The audience will influence it when you perform it live, so it evolves. It becomes part of people's lives.

Catherine: I guess some of my songs must be part of people's lives. I think that's nice. I do get emails that are rather affirming – that some songs I've written have meant something to them.

Vo I have a friend, who I haven't seen in 30 years, and he emailed me to say he'd seen me (on that YouTube clip above), with that girl doing that song I've loved since the 70s. He was so delighted it was you, and he'd been carrying that song about with him for all that time. He was delirious.

Vo, you've been playing amazing guitar for some considerable time... and as an artist and performer, that creativity thing has to apply to you too.


Vo: I think I see myself more as an guitarist than a songwriter. Songwriters inspire me. But I've been playing guitar for over 50 years. Occasionally I'll write something and it'll come out OK. But a lot of the time, I'll improvise. A few notes and a bunch of chords.


A few notes and a bunch of chords. Ha! But thank you for the dedication!


And on the conversation wove, eventually to find its way, as already mentioned, into a full-on feature audio programme. I found it very satisfying, as an extremely ancient boomer, is to see how the creative impulse doesn't so much go away as put down different roots, and shift and mutate, in unexpected ways.

It's very interesting to compare Catherine's and Vo's songwriting styles. Vo improvises – blindingly well – and then writes songs about discomfort and movement. While Catherine, largely but not exclusively, tells stories. And the two work together very well.

The full hour-long In The Studio: Catherine Howe and Vo Fletcher is in edit right now. I'll shout when it's done.

The video clip in this post is from the excellent Qoonsweird video team.

Everything else was recorded live to a venerable portable recorder I've used, heavily, for about 8 years.

Setting up and soundchecking was simple, pretty much a matter of experimenting with positioning. Catherine was slightly closer to the mic than Vo, and we had to fiddle about with the best placings for occasional percussion from Catherine. There was a rain shower part-way through the session – you might, just, be able to pick that up.

More music and In The Studio posts on Radio To Go