Draw it, print it, put it up... See it get nicked. Lewes Herriot and the art of poster design 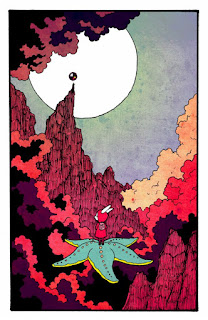 If you have muso facebook friends and you live in Brum, you've probably seen Lewes Herriot's work. Lewes is a man of multiple talents, which he cheerfully and resolutely refuses to shout about. As well as playing in a pretty damn successful band and having an exhibition throughout August at Birmingham's Digbeth Warehouse Cafe, Lewes has been delivering catchy and stylish posters for Brum promoters This Is TMRW for some time now.

They're lovely. They get nicked. That's the trouble with great poster designs.

It's always happened. I noticed this at first hand when I asked the amazing Hunt Emerson to do a brilliant, gently mocking design for Project X Presents. Hunt's poster placed West Midlands hipster heartland Moseley at the centre of the world, riffing on the classic Saul Steinberg New Yorker magazine cover. Instead of the Big Apple, Moseley was at the core of things; even King's Heath barely got a mention. It was fantastic. Hunt did us proud.

And all the posters were stolen within days.

The same has been happening with Lewes' work. It's led to some interesting discussions about creativity and context. 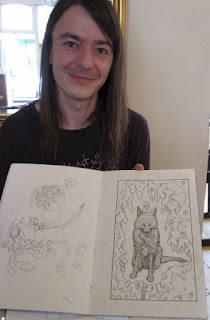 So, to a chat over coffee on a bright summer morning...

Lewes Herriot I've received no format training whatsoever. I didn't go to university. I didn't study art at school – it was music and drama, because I really enjoyed that. I regret that now.


Here's the thing. I did do a part-time evening course at Bournville for a little bit, but that was partly for ego. I wanted someone to tell me I was doing the right thing. After I'd been there for nine months, I'd had enough of that.

But how do you know you're on the right path unless someone tells you?


It's -  getting a reaction. Doesn't matter what reaction, but a reaction. If people just look at my stuff and go 'hmmm'... it's not working.

My reaction is that now you - or at least your work - is getting noticed. Partly because of the This Is TMRW posters, which have a very specific style. Lots of space, and a clear identity. 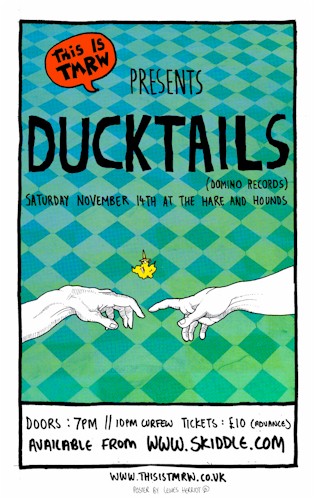 Well, I really don't consider myself as being well-known in the city. It's true that I always have some work, somewhere, in Birmingham. But I don't get to do interviews like this very often...

Tell me about size and scale. The posters that you do for This is TMRW, which I see on Facebook and in shops, they're A3 and A2?

That's not huge, it's intimate, really...


Well. we've been doing this since about 2007, so we've gone through a lot of iterations, a lot of changes, to get to the point where it is now. Which is a small lot of A3 posters, and they go up locally, very close to the day. And a lot goes on the internet. But when we started we had a lot of wall-sized posters, all kinds of things. We found the style had to change. It used to be that I could do whatever I wanted, and the aim was to create a beautiful image, just to get people's attention. But it went against its purpose, because people would see it and nick the posters! 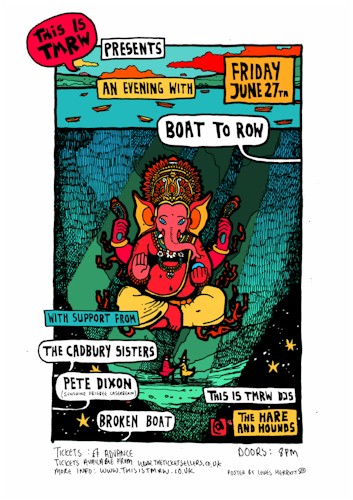 That used to happen when I was at University! College promoters used to staple posters up – lots and lots of staples - and once they were up, razor them into pieces so they would be much harder to steal.

It's a great compliment, but...

… but they shouldn't really be that nickable? They should be less attractive?


I had this really awkward meeting with Matt and Tom who run This is TMRW... they were trying to say to me 'How can you make it... less good?' It was frustrating. I was really angry at the time. I want to do the best I can do, I want my stuff to be amazing! But I realised that they were completely right. It was a challenge. And a challenge is an opportunity. They were telling me it needs to have a flavour. It needed to be my style, original and unique. But it needed to be simple enough that people would say 'I'll leave that there'. So I stopped being angry, and set about solving the puzzle. 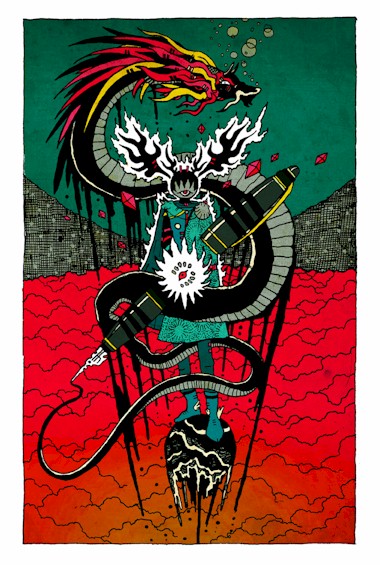 An interesting challenge. Does that mean you can go off and do other things as well?


Yes.  It meant I wasn't really happy to sell the poster designs as prints any more, which meant I suddenly had a lot less work available for people to buy.  As a sideline, I went to South Africa with the band (Johnny Foreigner), big tour. And when I came back, I just had the biggest creative low I'd ever had.  I felt I was starting again. Which was great, in the end, as I found a whole new vein of ideas and a new approach.

The interesting thing about playing in a band is that you get a set repertoire and you evolve it very very slowly, and collaboratively at that. You're not writing  a brand new song every week. But for a poster, you need an arresting design immediately. Is there a tension between the two?


The both are tremendously connected. I met Matt, I joined the band and I started doing posters, all at the same time, on the same night. It was in 2007, and I was in a really pointless, pompous progressive rock band. Matt had put us on at the Actress and Bishop. I had a conversation with him – my guitar was covered with illustrations and stuff... 'I'm kind of thinking about getting into drawing, posters – is this something you'd be interested in?' So he had me do a poster for a band.

The first one he sent me was Johnny Foreigner. I ended up doing posters for Matt, and doing work for Johnny Foreigner, They had just been signed to a major label – could I do a cover for their album? It all happened at the same time. They did three albums and I did the artwork for all of them, And on the fourth album they said they needed another guitarist. And they remembered that I used to be in a pointless progressive rock band. It all connected amazingly well. I wouldn't have had one without the other.

But Johnny Foreigner has been a bit quiet of late.


We've had a quiet year! We had all this intense promotion work last year. We've had this year off, with babies and weddings. And it gave me a chance to start again on my artwork.

So... I haven't asked you about your influences...


Aubrey Beardsley and Alphonse Mucha are my two favourites. I was always looking for my style, and then somebody introduced. That plus all the other things I'm into – that's my style.

That's interesting to an old hippie like me. Beardsley was everywhere in the 60s. Especially the risqué stuff.


I think it's timeless. A mastery or dark and light.

I haven't asked you how you deliver the work. Your influences are from an earlier age. But now some people work on paper, some directly, digitally, on screen. But it has to be digitised eventually?


I do half and half. I draw everything in black and white. For a poster, the image is done on one layer, and then the writing, separately. Then I scan them into my computer. And colour and arrange. Then it heads to the printer with Matt.

Do you talk to the print people? I should imagine that's pretty important – like mastering a record.


We have meetings every couple of months. Honestly? I don't really need those meetings. I know Matt does! He needs to keep me updated, but I only focus on the day.

If in 30 years time you're going to be on sale everywhere, your work will be up on living room walls, rather than in shop windows for a few days. That means quality paper, colour correction....


I don't worry about that. The only important thing is to do a picture and move on. I don't get too nostalgic. I need to work quickly, 'cause I get bored.


I've got some work in the Warehouse Cafe right now. My girlfriend is a collage artist. We've been talking for some time about collaborating. I need to get the quickest way to go from there to there, to there... whilst my girlfriend is the exact opposite. So that's a project... 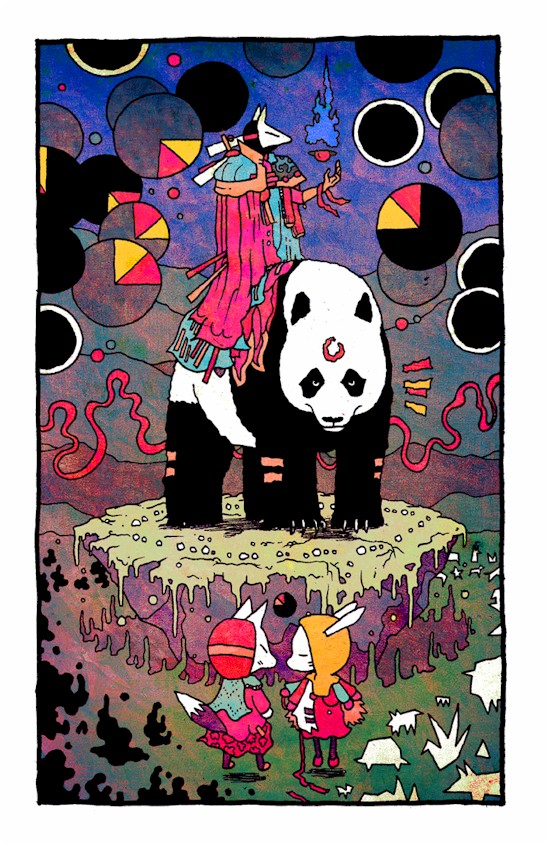 Lewes' website and Big Cartel pages
This is TMRW

See more posts on photography and images on Radio To Go

Beautiful, and interesting to see the 'Awfully Wierdsley' influence brilliantly incorporated.
A request: any chance we could see the Hunt Emerson artwork you commissioned?

Neil - I will ask Hunt if he has it on display on his site, or if he would let me put it up.