There's a solid but unexpected Birmingham connection. Who would have thought that Brummie Louis Clark, who handled most of the early arrangements for the Electric Light Orchestra, would have inadvertently inspired a girl who went on to be one of the most influential women in Birmingham music? This happened though his successful (but excruciating) Hooked On Classics series. Go figure. 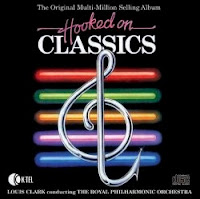 Strange but true. I first saw Louis conducting a 30 piece band behind Raymond Froggatt at Barbarellas, sometime in the 70s. I interviewed him for the old BRMB a decade later, when I got a full and frank picture of his ELO days. When the first Hooked On Classics became a huge commercial success, it gave a young Clare Edwards her first exposure to some of Classical music's most catchy tunes.


Fast forward thirty years. Clare runs several music projects worldwide, but for the past 20 years her Birmingham baby has been a rather lovely non-audition choir called Notorious. Yes, they took the title from the Duran Duran song. It's a generational thing: when Clare pulled the choir together, they were crazy 90s kids. If it was my call, I'd have called it Dark End Of The Street, got a pedal steel guitar in, and dressed everyone as goths...but to be honest, I don't think that would put bums on seats.

Full disclosure time: for the past five years, I've been singing with Clare's choir, and it's been fascinating, a proper learning process. It's humbling and inspiring to sing with people who have fabulous voices and a ton of serious choral experience, and equally interesting to see someone who's been a pal for ages bringing all her professional chops to rehearsals.

I'm happiest when the choir does Classical repertoire. Parts for second basses in pop are a trifle predictable. I had to grind through more 80s and 90s pop than anyone should ever have to when I programmed the output at BRMB. I dutifully listened to everything, with gritted teeth: pitifully few good songs among a tsunami of grimly awful stuff, week in, week out. I admit to bias.

But I'm happy: to celebrate the 20th anniversary, we've got a doozy of a gig at the end of the month, at Birmingham Town Hall, with Faure and Rutter as centrepieces. There'll be a full band and a choir augmented by lots of old Notorious hands returning for the celebrations. You should come if you're in town. I can almost guarantee there will be people you know at the gig.

Do have a listen to the Brum Radio interview with Clare. When we chatted, I got a wonderful perspective on the work she does, leading a disparate group of people through a complex and disciplined music maze. It's not just knowing the music, it's reading the people you work with. There are fine technical points about tempo and phrasing to deal with, of course, but there's also the emotion and the passion – the point when the singer lets go... and just flies. I find the process so interesting. But then, everybody's interesting, when you think about it.

... and here's the gig details. Tickets are here 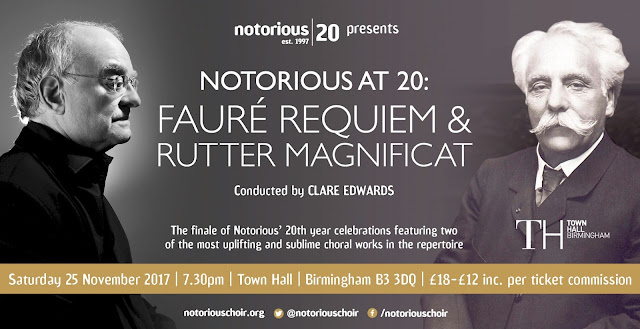 I do stuff on Brum Radio, a volunteer-run internet station. It's online here; download the Brum Radio app here. My Brum Radio page is here; scroll down for all the shows.

The Notorious gig sounds wonderful - but unfortunately, Saturdays are sport days; so I will be engineering the commentary at Twickenham for England v Samoa. Please tell me this event will be recorded...

Good to have the blog back, by the way. It's been missed!