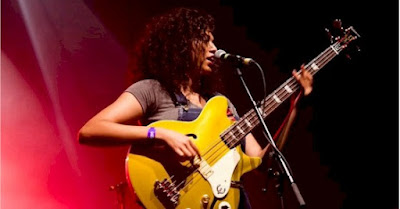 Mahalia's at home in Erdington, clutching a mug of tea. She lives there with her mother, who was with her four years ago at Moseley, and is now sitting across the room. It's all calm and serene.


You kicked off with a song called 'Let The World See The Light'. It got a lot of support at community radio level, and there's half a dozen videos on YouTube of you playing it live at various places. How do you feel about the song now?

I can see maybe why you stepped away from it at 15 – maybe you got a bit hard and cynical?

I think it's too good not to love. When you sang it four years ago, I think you stirred up a nice Birmingham muso buzz. But since then it's been all quiet on the Mahalia front. Until, suddenly, there you are on Jools Holland, with Rudimental. That's a bit of a jump.


Well... I went very quiet because, basically, I was doing GCSEs. So music had to take a bit of a back seat. I've been writing, doing sessions and such for the past three years. About a year ago, after I finished my GCSEs, I went into college... and started working with Rudimental.

Just like that? That doesn't happen. Well, not usually.

Ah. Me and Rudimental, we're both signed to the same label. I did a session with them. We went in for one day, just to see how it would go. By the time I did that, I'd had quite a lot of experience going in with other people. I found that very hard at the beginning. But it's been a quiet but very productive three years. I had time for school and things like that.


Four years makes a huge difference though. Watching you on Jools Holland was impressive. They'd opened with a song by Foy Vance – tough and punchy and a veteran – and you had to come on and hit just as hard.

His voice is fantastic. I supported Ed Sheeran when I was about 14.

And Foy Vance was on that tour. That's how we met. But it was hard. I found the experience quite challenging, just because it was on telly, there was an audience in there. And I didn't have my instrument, which was strange. Even though I do sing on my own in my own set, that's very different. One, there's a lot of people on stage, and two, you're very much the front man.

Plus there's a roomful of musicians all in the studio looking at you... I'm sure some might have been less that charitable towards you, even if they wouldn't admit it. I'm assuming there's going to be quite a bit of work this summer with Rudimental, cos you're on their album?


I hope so. Not sure how it's going to go. I wrote the title track, 'We The Generation', on the new Rudimental album – which is wicked - so when they do festivals in the UK, it would be great if I could be a part of that. I'm going to do festivals on my own, like Mostly Jazz on the Sunday. So I've got my own stuff as well. It's kind of pushing both.

When you're out on your own with your own stuff, what line-up will you be using?


It's quite different from what you saw four years ago. Mostly I play guitar. One song I play on bass, and some on piano. I have a small band. My drummer's been with me since Moseley, and he plays a full kit, or cajon, or shakers and percussion, depending on the gig. I have a new guitar and bass guy, who I went to school with. But there's a lot of people at college I can work with too. But I really like Moseley – it's such a nice vibe. 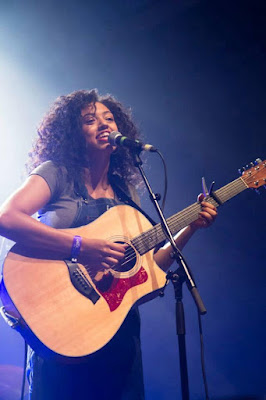 If you don't mind my saying so, you're still very young. You've still got to see how your style or styles will crystallise and evolve. You can't yet know where you're going.


No! I find it really hard to know what my sound is. From 13 to 17, my voice has changed, my playing has change, everything has changed. I'm still working that out.

One of the reasons your progress and development has seemed so discreet, only coming in sudden bursts – like the Later slot with Rudimental, and that record deal – is you have insider help from your parents. Which must have come in useful?

I don't feel I've been pushed in the wrong way. That was the worry. But also, I'm quite lazy. . I've now got a home studio, with Logic, so I can just do a song when I want. It's lovely that all that is so accessible. You can do a demo, and put it online, and things can go viral.

But the big challenge with that, and I've had this conversation dozens of times, is people now don't expect to pay for the music they listen to. So as a coming artist, with a heavy decade of work looming, is how do you stay sane and focussed when the major source of revenue is going to be from live gigs, and direct sales at those gigs?


It is challenging. I never understood it until I had those conversations. It's a serious thing. How can you do it right and how you control it? I see a lot of UK artists, and they're constantly out touring.

The plan for the summer and the rest of the year?


Gigs, lots of festivals, and I finish my album – effectively to launch me as an artist. Maybe an EP in the Autumn after Mostly. Rudimental's album comes out in September, and hopefully I'll have an album out for the new year.

That's not all. If you dig around the Birmingham open mic scene, you might see Mahalia doing low key gigs here and there, warming up for Mostly.

For example, the good people of Boldmere caught her at Boldmere Street Festival on Saturday. These gigs are tricky - the crowd don't know the acts, traffic's streaming past, some people are shopping. Most people are there to socialise as much as to catch some grooves, and there's always a lot of booze.

So with a crowd like that, brash, shouty and familiar usually goes down a treat. But Mahalia was pretty damn impressive, quietly drawing in an attentive audience, who moved away from the boozer next door and actually listened to what she was doing. She had all the very young kids from the first chord. They were up and dancing, a properly appreciative audience. Nice going.