Rumbles in the radio jungle 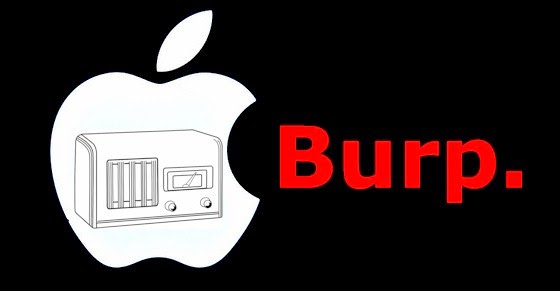 Further down this post, I've got an analysis of five stations (three West Midlands analogue, two national digital), with their current most-played artists, taken from the Compare My Radio site. Everyone is playing youth diva Taylor Swift. Four of the five are playing Sam Smith.

It's a typical pattern; has been for years. Most commercial stations go for safe, reliable and familiar. It's the McDonalds way: familiarity and repetition. Punters know what to expect; the brand is crystal-clear.

But the web came along and overturned the applecart. And now, news that came out last week could have huge implications for the industry.

And the news was this: It was announced that Apple has hired four BBC Radio 1 producers to join Zane Lowe, already on the West Coast, to work on their streaming services. 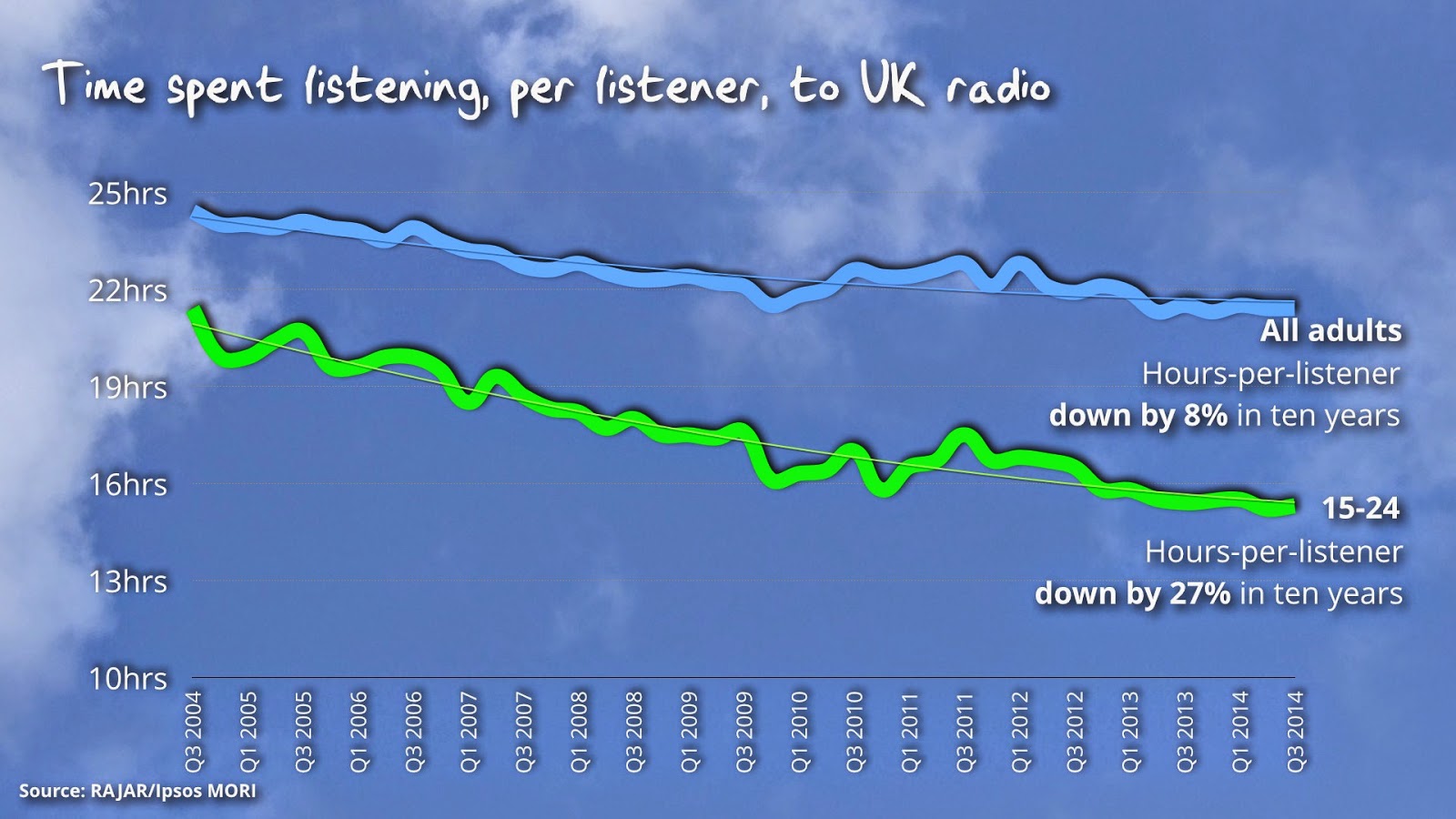 Streaming is where young listeners are these days. Youth radio listenership is in significant decline, as shown in this RAJAR graph. It's a long-term trend. Apple's decision to bolster their streaming output looks ominous, not only for streaming rivals Spotify and Pandora and outfits like Radio 1 but, far more seriously, for UK IR pop services.

If iTunes Radio can customise its services to the extent that it can outgun rival streamers and terrestrial radio, starting with all those new, younger, early adopter listeners, all bets are off.

I mentioned the McDonalds radio approach earlier. Now, Big Mac and Big Radio both seem to be losing market share. In MacDonald's case, there are other, sexier competitors challenging for a slice of the action. 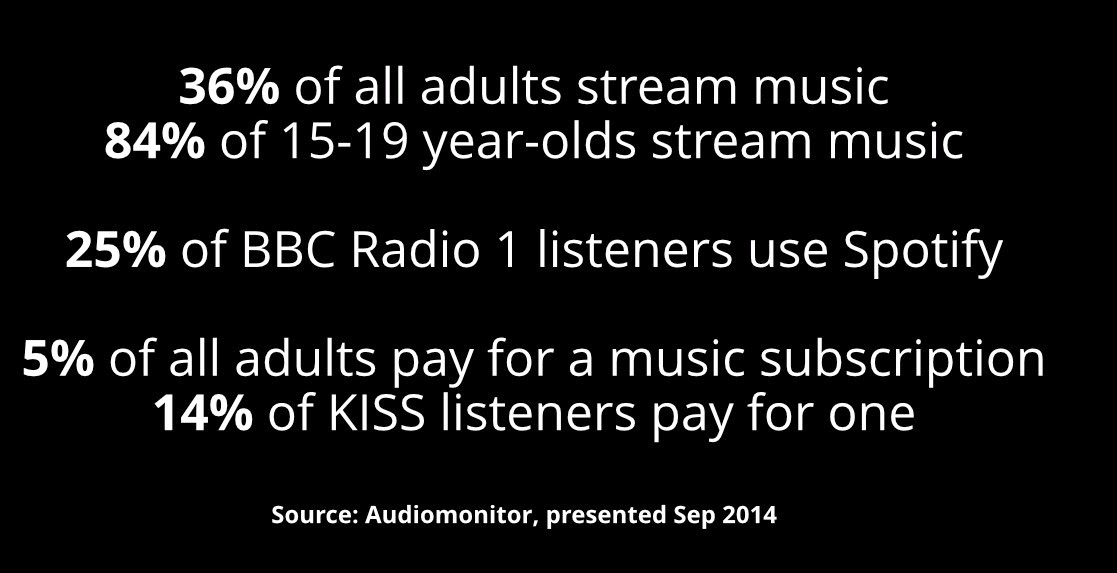 The analogy doesn't stretch too badly when you look at the youth radio market. I've been working with groups of teenagers at school and university level for the past eight or so years. The movement away from radio is clear. Where people still listen, they they listen for less. The younger the listener, the bigger the shift. The Apple development adds a whole new twist.

Let's put DJs and presenters to one side - not that difficult, in most cases - and just think of pop radio as simply a device to deliver pop music, for free. Now... consider the new contenders. It's clear why UK pop radio's 50 year run may be under serious threat. Now, that same music, and a whole lot more, comes to you online, on your phone, on your computer - everywhere. The transistor radio? The Walkman? Gone, pushed aside by the smartphone. The same rules apply to terrestrial pop radio.

Apple is huge. It's never been wealthier. Apple has research tools to burn. It has cash, brains and resources enough to overwhelm whole countries, never mind a risk-averse medium that has long followed trends, rather than creating them.

Now, Apple is thinking, hard, about how people consume audio. It already has huge databases and the tools to analyse them. It's looked at radio airplay patterns like those at left - note the Taylor Swift ubiquity -  and maybe it thinks it can do better.

But here's the interesting thing: Apple has grabbed, not some slick broadcast radio exec, but the nearest thing Radio 1 had to a contemporary John Peel. And Zane Lowe has given up, by his own definition, the best radio gig in the Universe to join Apple. Their offer had to be something amazingly interesting. Lowe never took a super-cautious programming approach; he celebrated the new, the adventurous, and the different. So, combine this with Apple's phenomenal resources, and you could get a powerful set of developments.

What emerges will not be a new version of an old product. Pop radio has largely painted itself into a stale, risk-averse corner - see above. Apple are creating new products for a new listenership. It's not radio, but it means big trouble for radio.

And if and when its new service is running on rails, Apple could simply stamp on youth oriented music radio with a sexier and glossier product, in exactly the same way the big radio companies stamped on their smaller rivals, worldwide over the past 20 years. A 20th century entertainment product is going to have to deal with something new, ubiquitous, shiny and appealing, that could focus much more directly to individual listeners on new platforms.


So it is all doom and gloom?

No, I don't think so. This just may be the start of a very positive change. Radio has a stay of execution at the very least. The platforms will change, but the right content can work. While younger pop listeners are drifting away, older listeners, say 25 and up, continue to be avid consumers, on multiple platforms. Speech radio stays strong. 5live and TalkSport have large and loyal football-loving audiences, and I don't see how that can be easily eroded by niche tribal programming – it's already tribal. But those stations that thrust Pharrell Williams at you every two hours? It's not looking good.


And is this the end of radio?

Of course not. Radio is, essentially, a way to tell stories, to communicate, to share passions. 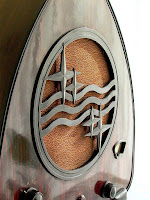 If conversation is dead, so is radio. But we're all still talking. We're all still telling stories - just look at what's on offer as podcast downloads.

So it depends on the conversation. And that's where adventurous radio can score.

If Apple's audio product can manage to be proactive rather than reactive – and you can bet that's what Zane Lowe wants for it – then it's really going to shine. It will be constantly analysing the past and the present, so as to predict the future - up to now, I don't think that approach has been a great success. But Apple should be able to do this better than it's been done to date. This places a premium on tracking the early adopters, the experimenters, who get on things before everyone else.


Niches matter. And how.

The clear threat is to operations that have expunged adventurous and unique programming from their schedules. But costs have come down, empowering new entrants that can fly below mainstream pop radar. I'd really like to see renewed growth in niche radio and streaming, always assuming costs can be kept under control. That could usher in hundreds, thousands of new entrants. Let them all flourish. And, hey, if Apple picks up on something good, so be it. Creative music radio has always been here in one form or another. Now, the playing field has changed. Again.

So there may still be a hopeful future for the niche, the left-field, the oddball, the truly local. If it means that Apple then swoops on and co-opts any activity that's kicking up a storm, well, that's simply a more powerful, speedier version of what's always happened. And I actually applaud that.

If a station, streamer, or hobby broadcaster does something that hits home – finding a band, coming up with a fresh idea – it will be noticed in our online world. Not necessarily by that many listeners, but certainly by those people who are paid to analyse and spot trends. That means talent has a better chance to flow up and out, bypassing the leaden and unimaginative assumptions that currently strangle much music radio.


My thanks to James Cridland of Media.Info UK for the graphs and info slides.