So this is the first video with the current line-up. Can I be really nosy and ask you about cost...? 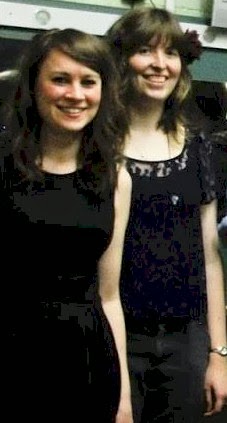 Total outlay £300 for something really rather accomplished, going by the guidelines laid down at the excellent Radar Video web market place. Caroline Bottomley, who started the site, pointedly tells bands with less that £200 to spend that they might well be better off shooting on a, iPhone and getting some free software to edit on.

This means you've done a great video... for beans. How?

Lydia We were lucky. Tom approached us initially to do some live sessions in Cannon Hill Park, to build up his portfolio. So we got those for free. And when it was time to do a 'proper' video, we asked Tom if he would shoot us.


Anna He's starting out and he's very good. We're just lucky that we got him at the beginning of his career. And we hope it profits him because he's done a fantastic job.


The video features lead singer and main songwriter Michael King and band wandering soulfully in a sunny and appealing rural landscape (my local park, as it happens) and then, as a counterpoint, sees them huddled on the chilly streets and blue brick railway arches of deepest Digbeth.


Anna Yep. To represent the daily grind versus imagined nostalgic past with fewer responsibilities. But if was really cold...

Anna We were trying to play, and we kept having to have breaks to warm up in the car. We were all playing, for the video. I don't know how good it sounded to the casual listener. We did this in November.

Lydia Tom sent us the whole thing to review. We suggested a few things – not too much – and he changed a few shots and a bit of the colour. In general, we were very happy with it. But there was a dialogue. 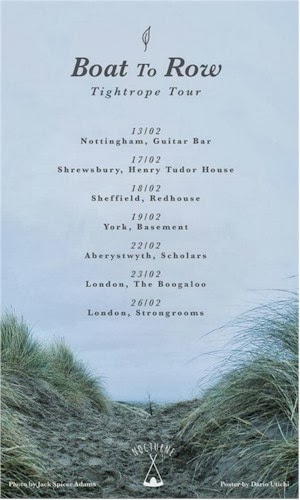 OK. Video done and dusted. We're actually having this conversation on the official launch day. What's next?


Anna We get the video out as far as we can (see below), on blogs, on social media, sharing. Then we're touring a few dates, and finishing up with a single launch date for 'Tightrope' in Birmingham on the 28th February at the Old Joint Stock. It's on vinyl, with a b-side.


Lydia It's something you can hold. If it was just on mp3 – and we're doing that as well - then it's insubstantial. There are a lot of people who like vinyl. It's bigger... it's more of a special thing. A musical object.


It's funny how vinyl has come back as a desirable object. But come back it has, possibly as a marketing trick, possibly as a reaction to iTunes and ubiquitous website delivery. But Boat To Row's very own musical object will come out on the band's new record label, Nocturne. And that, too, is the banner that the band uses for gigs they promote. The first took place earlier this month, at Ort in Balsall Heath. Lydia drove this one...

Lydia  I had the initial idea for Nocturne and set it up first of all with Josie at Ort. but then it was Hannah Fathers (the newest member), who really pushed it through with her own Urban Fox setup in the end. Josie was looking for promoters to take over organising the gigs at Ort. You can do as many or as few as you like, really. I thought it might be a good idea, working with some of the people we met, working with singer-songwriters. We'll probably do one every other month. But I don't want to put a timescale on it – you can lose momentum. I notice that with some regular things, it becomes harder and harder to keep up the standard, and to keep people coming.

Lydia or not paid at all...

Anna ….when we'd brought loads of people in. So we're doing a percentage split. People will always be paid something, and if we get good numbers, every one does well. We did OK last Friday, People got loads more than they were expecting.


The arrival of Michael King. Hooray! Mike, tell me about the song on the video. It's your song. What were you aiming for?


Michael  Things can fall out of shape... and you can almost see it happen. But you're torn between what you want and what's right.

So what happened in real life? Did you intervene, did you do the right thing, or did you let it slide?


Michael  (grinning, to wry laughter from Lydia and Anna) It's ongoing. I think it's always going to be ongoing.

When you write a personal song – and that's what you do - they can come around to bite you in the bum ten years later. Because you've put it out there, even if it's in a coded way, you are spilling your guts.

Michael When you do that, it's whether you let on. I do this for myself. For me, it was a song that bridged a gap. Musically, very chorded and open, and I'm not usually that kind of writer. And I really enjoyed doing the video stuff. I didn't think I would, but it was great. We wanted Tom Avery to come up with ideas about the song. It was very easygoing.


Michael And that's a point too. In the past, we've been just that. But in the past two years, we've been very adamant as to what we want. We're not going to be divas about it, but it's something we've got to do.

Well, I wonder about that. I think you're a lovely band to watch – really nice. You've got good songs, the audience numbers are good, you relate well, especially to the crowd... but everyone is relaxed and easy with each other. I've seen a number of reviews that describe the band as having great charm, and they're spot on. But maybe there's a point when you have to push harder...


Michael I think what makes it clear to me is... the amount of effort we put in. If something isn't up to the right standard, it's not worth it. Nobody else sees that – the hours of emailing, the negotiations, the rehearsals. What they do see is what you want them to see: the videos, the posters, the show, us on Facebook.

And that extends to the label?


Michael We had the idea of releasing our own stuff on our own label. It's part all that. It's evidence of how we want to go. I don't know if we want to release anyone else

Lydia We've had some enquiries ...


At the point of publishing, the new Boat To Row video had clocked up 1,646 views, in six days, purely through fanbase recommendations. That is terrific going.

Full tour details are here on the BTR site