Ten weeks on from Mittwoch

A chat with Jean Nicholson at Birmingham Opera Company 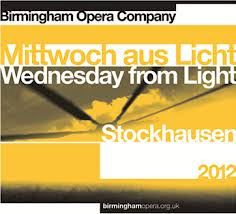 I don’t usually do reviews on this blog; lots people do reviews; that's fine, and I’m grateful for their perspectives. So this isn’t a review piece. I’m just picking through the memories of a past event, because this event, like so many of the other activities I try to cover in Radio To Go, is marked by the people who pour themselves into making it happen.

Now we’re deep into gloomy Autumn, it’s good to look back at Birmingham Opera Company’s stupendous summer production of Stockhausen’s impossible to sing / play / stage Mittwoch Aus Licht. It got a ton of coverage, of course, and there are bits of it to be found here and there on websites; links are below.

I loved it. I remember the extraordinary womb-like feeling of sitting down in the dark at the start, and entrusting myself to the company. And when the lights came up again, the number of people wandering around smiling, open-mouthed. And just how many local musicians of all stripes were there. And being amazed and engaged.

In the middle of all this is the affable and formidable Jean Nicholson, BOC's general manager. Jean was kind enough – after a barrage of emails - to find time to chat late last month. Up until that point she had been wading through post-event administration.


The string quartet in the sky – The Elysian Quartet in four helicopters, hovering over the Argyle Works, a stones throw from Digbeth on one side and Millenium point on the other– went out to a lot more people than those in the venue itself.


"It was included in The Space – an initiative from the Arts Council and the BBC – which was planned for the Olympics and now extended. An online platform was created; our contribution to that was twofold. One of which was a trail to Stockhausen, with a dedicated website with lots of information, lots of blogs from people involved. There was also a film project: Eleven young film-makers made films in response to Mittwoch, and that was included on the Space. Three other  films were up there too: films which were edited highlights from the BBC's archive of Stockhausen.

A series of performances which were attended by…?


"It was attended by two thousand, two hundred and forty seven people. In total - the live performances.

I’m interested in the ripples which went out to a lot more people, one way and another… It flowed out.


"The helicopter String Quartet was streamed live, on the Space… and two of the big screen sites, one in Birmingham and one in Coventry, also carried the stream, live. Quite late in the day, it also became possible for us to stream the whole performance live, from our website. The whole opera. One performance only.

And that reached how many people?


"About four thousand. But the complexity of rights for these is fairly tortuous. As a relatively small organisation, achieving full buy-out is fairly tricky to do. We did get an across the board agreement that one, free, streaming became possible.

Would this have been easier if you were working with something that was long out of copyright?


"No. It’s complex. The added complexity of a lot of classical music is that the rights are not merely in the composer – there is then the edition of the music. Rights are payable for the use of a learned edition of a work. If you want to do a Mozart opera, you might think no rights have to be paid. Sadly that’s not the case, unless you’re willing to go to the original source and copy it all out yourself. There is a right in the engraving – the person who inputs in to one of the music notation programmes – Sibelius or finale - and a right in the edition – two subsidiary rights beyond the intellectual property.

Given the absolute truckload of admin and management work which all this entails… how rapidly does the company shrink back down after a performance like this?


"Three days. But there is, around the core of us three, a further core of regular associates. We have a shorthand available, because so many of the people who come in and work with us on these projects, we know very well. That level of familiarity gives you speed and efficiency.

But there is a long extended half-life to your performance. You had the big bang – the week of performances – but there is a resonance afterwards, and that is still going on.

"It was a weirdly bewitching piece. …"

and the echoes and the extra dimensions…


"It’s a challenge for what is possible. It wasn’t surprising to us that this was a piece that a major opera house couldn’t do. They do a different job. It’s a physical thing: it required two performance spaces. In a weird way, the piece comes to us – because that’s what we do. The skills you need to do it are… probably Graham Vick… but we know a lot of people, we have a lot of friends. There was a building that the Stockhausen estate felt would suit well; they liked the company. At that point, the skill was to put together a very fine, detailed rehearsal process. That why a standard opera house probably couldn’t do it – because you have to put all your resources into it.

Stupid question: what happened to the stepladders? What about the cushions and foam mattresses?


"The stepladders went back to scrap metal. The mats were recycled into the music train project that the Cultural Olympiad did. All of the mats went to the floor of the train.

I noted a huge surge of pride and engagement with the event, even among people who didn’t attend. There were flurries of tweets and Facebook chatter around the helicopters parked up outside Millennium point. When you took the train into New Street, it started a buzz in the train itself.

To me, people seemed quite proprietorial about the whole thing. And the post-event buzz was fascinating to follow. When you have an event that is so engrossing, and so engaged, that engenders such a sense of passionate involvement…what happens when it comes to an end?


"Well, that’s not the end of the event for me. I’m not in that headspace. I’m approaching that now. That’s post-production. Richard (Willacy,  Associate Artistic Director) has only just been able to go on holiday now.


"We’ve been working on several ideas. The next really big event is a production of Mussorgsky’s Kovanschina, or The Kovansky Conspiracy, as I think we’re going to call it. It’s a really fabulous, big, Russian opera with a most fabulous story. A great, great piece to do.

"In the run up to that we’re doing a series of much smaller pieces of the project; the first phase of that is going to be in March next year. We’re working on four Mussorgsky songs called the Songs and Dances of Death. They’re a bit macabre, but rather brilliant. So we’re doing some research and experimental work on the translation of those with Alastair Beaton.

"It’s just for a baritone and pianist, and I’m keeping my fingers crossed that Eric Greene, who sang ‘Life Is a Dream', will be able to come back and do that. It’s forty minutes, and we’re going to put more resources into distributing it and the whole digital project around it. So the idea is that over a four to five week period – actually the piece is made in the first week – and thereafter it will appear in various pop-up performances. So you could book it for your living room, if you’ve got a piano and you don’t mind somebody filming it. Or workplaces, or shops, or…

"The idea is to do lots of lots of performances. The live experience in different places, different contexts. But you still get the top guy singing, which is rather fabulous. So that could happen in the Town Hall, it could happen in your living room. It will be both. Attached to that is the notion of participation: local people having the tools and the skill to develop online content. A lot of that emphasis is going into film. We did the first phase of this on Mittwoch, with the resources that came in on to the Space.

"The Space is continuing past its first phase – there is a commitment from the BBC and the Arts Council to continue for at least the next six months. We will be working on that, people will be filming. We will working with editors… Graham Vick’s going to have a go with that, because he’s never made a film. We’re going to so some sound stuff – more podcasts – just to see what we can generate out of this one small unit of art. It’s challenging stuff.

"There will be quite a lot of singing to do – so we will be doing some core Birmingham Opera Company vocal work. And we need men. We’ve been doing very well on the men front, but it is notoriously difficult to get men singing. Our rehearsals are open… but it is important that we get out there and encourage people to have a go and get singing….


Links:
Birmingham Opera Company would love for you to get involved
The Space
The Elysian Quartet and their video on The Space
Ex Cathedra
Posted by Radio To Go at 08:37