Everybody Wants To Be a Cat: Electric Swing Circus spell it out 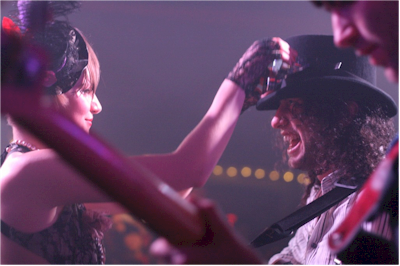 Two videos to announce their existence, which in a year have racked up well over 200,000 YouTube views between them; a string of Electro Swing club nights leading up to their first festival; and a snazzy website.

Then there’s successful crowd-funding to build up funds towards their first album, a pretty unique musical proposition in their hometown, and on top of that, a whole big chunk of their appeal flowing from live showmanship, snappy good-time tunes, and not a little onstage showboating. It’s looking good.

Guitarist Tom Hyland brings a lot of the onstage razzmatazz; he looks the part. Lots of corkscrew hair, extravagant headwear, and plenty of effervescent stage moves. It works. Offstage, he’s just as effervescent, but affably grounded with it. And for all the fizz and affability, there's sound strategic thinking behind the approach.

Let's start with image. You've managed to set your stall out pretty effectively. You played in Alternative Dubstep Orchestra in 2011. Was there anything you took from that ?


stated flat out from the start that they were a big band, a good band. And they were and are. They didn’t take the slow steady build-up route; they went out there and said, clearly, ‘here we are’. And it worked, it worked really well. I looked at that, and realised that this is really possible, you don’t have to claw your way up. And actually, to be quite honest, if you can deliver, that’s a good way to go. have that fire…

Yup – those gigs in the spring of 2011 were inspirational. Got to agree. But you didn’t stay with ADO.

No, I didn’t. It wasn’t really… I’m the most happy, jumping up and down kind of guy, I don’t think it was the right fit.

It's a valid point. A lot of ADO's appeal is a combination of the cerebral and the deeply passionate. Tom likes to strut his stuff. Music styles notwithstanding, I can see  and ESC both taking their audiences to exactly the same point of exhausted collective delirium. But they'll get there taking very different routes.

If I can say this... you do rather like to showboat on stage.

I do. I genuinely believe that when I go to a show, I want to engage. I get fed up of people just standing there. It’s a personal thing, and not everybody agrees with me, of course. But we’re a dance band, it’s all about dancing. We don’t choreograph our shows – although I’d love to. But if you want your audience to dance, I think you’ve got to do that too.

Wait a minute. All those great black harmony groups of the 60s used to be choreographed – think of the Temptations, or the Contours, or Sam and Dave… It would be terrific – and people kind of expect it from your videos… which we’ll come on to in a bit.

So how did the idea come up?

Three of us had started working on an idea, but it wasn’t the Electric Swing Circus till we had everybody on board. But to go back to for a moment – they have a lot of terrific ideas about how a band should be organised, and I have a lot of respect for that. A lot of our ideas were modelled on what did: something really good, with a great philosophy. . We wanted a scalable thing, with performers coming in and out, with circus performers, musicians that went in and out. And it would be that sort of collaborative project.

But it turned out that that didn’t work. For a couple of reasons, partly the commitment of the people involved. So we wound up with six people who really wanted to push it. So we had six people’s ideas.

And we are a co-operative. I don’t own this – all six of us own an equal stake. If we had a manager in the future – I’m doing that now – he or she would be equal members of the co-operative.

Does that mean you have a formal constitution?

Yes – agreed verbally, and we are going through the process of writing it up with Co-ops UK. I think it’s the best way for a band to operate – depending on the band. If everyone pitches in, it works, if they don’t, it can be a bit of a problem.

People swap into and out of bands with amazing regularity. And that’s a good thing, because it allows this creative ferment as ideas travel around with the musicians who band-hop. How does that work with ESC? What would happen if you were invited to play in another band?

When we started, it was a case of committing what what you were prepared to commit to. No-one’s been told to commit. But right now, no-one’s able to play in another band, because we have such a busy gigging schedule.

OK, let’s talk about that. It’s been a pretty successful first year for the band… What did you do? Lots of bands would be keen to know

The YouTube videos of 'Penniless Optimist' and 'Everybody Wants To Be A Cat' have been very successful. Two very well-produced videos, done by friends of mine who are pro videographers.

And you did those right at the very beginning…

There’s a school of thought that people put their videos out too soon… and then you’re stuck with videos representing you at a very early stage in your development… and you may not want that image hanging around online for ever. So do those videos represent the band as it is now?

No. We’re a lot better than that now.

So you traded off a potential future image problem line against major exposure now?.

Yes. But people went ‘wow’. |It’s not as good as anything we could do now, but people still went ‘wow’. As long as they do that, that’s good enough.

So now I’m waiting to see the next online stuff. When’s that coming up?

We’re still finishing up the album. A couple more days in the studio to get some vocal tracks.

So given your very speedy and ostensibly surefooted progress, can I ask… are you making money? Is that an OK question to ask?

Happy to answer that. In the year and three months that we’ve been a band, we’ve just paid ourselves for the first time… a hundred pounds each.

For a year’s work

Yes (laughing). BUT… we have some money in the bank, which is going to pay for the mixing, mastering and recording. Including the three grand we got from Crowd Funder (see the detailed blog post here), we’ve spent four and half, five grand so far on the album. So this is money we’re not having to pay out of our own pockets, this is money that’s come from gigs. Rehearsal costs come out of the band money, touring costs like petrol, food and accommodation are charged back to the band. So it hasn’t ‘cost’ us anything.

In the plan I drew up for the band, we’re kind of where I wanted to be. Maybe four months behind, because we don’t have a van yet. When we have a van, probably in May, with the album and a new video, we’ll be in a good position. Lots of new live material – we’ll be set up as a bona fide band with all the stuff that you need. And that will be enough to keep us ticking over with gigs. Plenty of bands break big with their first album.It’s not financially sustainable…yet… but it could be. As long as we follow the path we want to follow. 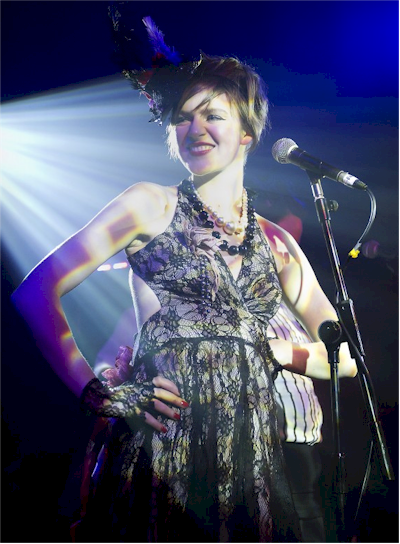 Tell me about Festival gigs this year.


I can’t tell you yet about the festivals we’ll be playing, apart from our own – Swingamajjg. (proceeds to reel off a list of impressive names)

OK. What about home town gigs?

We set up Hot Club De Swing because we couldn’t get a gig in . We still haven’t played the Yardbird, which is crazy. But we haven’t done a gig in which hasn’t sold out. We have a very strong hometown crowd. But we don’t want to play too often – maybe once every two or three months.

So you won’t play automatically at your own Hot Club De Swing nights? You have that brand, you have Swingamajig, and you have the band – Electric Swing Circus. Are you not worried about blurring your brands?

Yes, I am. We’ve also got Ragtime Records as well! Particularly in the early days we had people coming to Hot Club expecting to see the band. But there are good reasons to separate out each brand. Hot Club is a club night, Swingamajig is a festival.

I work with Stage Bus as a day job, staging festivals and events. I’ve always wanted to run my own festival. And people were asking us to do something bigger than Hot Club. So I took the plunge this year – put some money into it, it’s a really expensive thing to put on…. The only reason it can get off the ground is that everybody is coming down for favours and expenses and so on. Everybody has been really supportive. I think that the Electro Swing community needs it, and needs it. Up to now, it's been a very London/Brighton thing; but there is so much talent emerging that it’s good to be able to let people know that you don’t have to go to or .

A History of Electro-Swing, compiled for Radio To Go by the C@ in the H@


Subscribe!
Get the Radio To Go newsletter to your inbox every Monday.